Jordi Sabater (Barcelona, 1975) has the habit of crossing Barcelona on foot: every morning he departs from the neighbourhood of La Salut (located under the parc Güell), diagonally walks across several squares, heads down to Paseo de Gracia until he reaches Plaça Catalunya and he traverses it while trying not to slip on those watery tiles, still gleaming in the early morning. His tour ends on the Ramblas, where he works as a cultural manager. But I didn’t get in touch with Jordi to talk about his work, but about his passion: lately he only reads novels set in Barcelona. This has led him to approach the city in a different way, to discover new routes and, since the end of 2012, to create the blog called ‘The great novel of Barcelona’. My goal is to explore the city through people that make it as vibrant as it is and I’m interested to know more about the experience of someone who explores it through its literature. 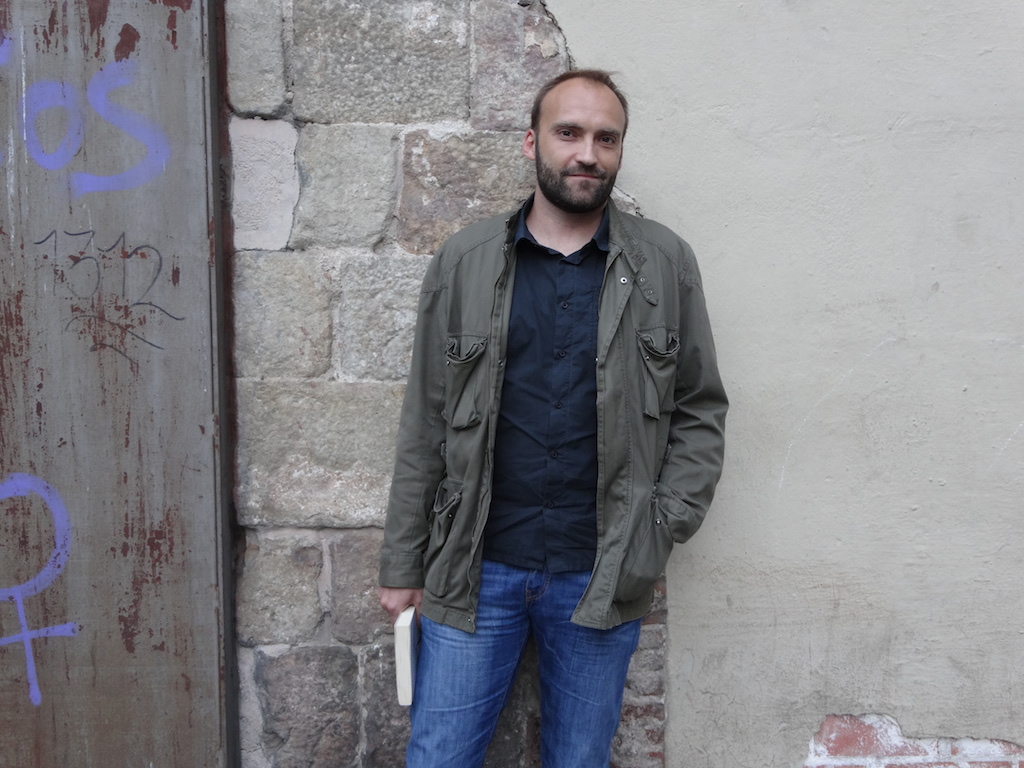 When someone recommends a book to me, I instinctively ask if is set in Barcelona…

… Because you only read novels that are set in Barcelona.

Yes, perhaps it is a little strange. For me, the novel is a perfect genre if you want to really get to know a city in a relaxed manner.

The Latin concept (and forgive my pedantry) of docere et delectare: to teach and to seduce.

Maybe, yes. When you read a story that appeals to you and, at the same time, you discover customs, behaviours of characters, parameters that govern various historical periods and characteristics of neighbourhoods, streets… Neither essays nor poetry can offer you this type of experience, this connection to the city. So, for a while, I have only been reading novels set in Barcelona.

I do not think there’s anything wrong in defining the sort of things you are interested in reading and to read about what you really like. But, how did this hobby start.

I’ve always liked authors from Barcelona such as Juan Marsé, Eduardo Mendoza, Manuel Vázquez Montalbán… And one day, Ignacio Agustí’s pentalogy fell into my hands: five novels, really well written, about Barcelona’s bourgeoisie, portraying Franco’s Barcelona. The authors I just mentioned, show a perspective that is closer to opposite side (against Franco), so I thought it would be very interesting to compare the similarities and differences of the various Barcelonas captured by several authors. I started looking for different views and my interest grew more and more. There was a moment where I wanted to share my discoveries.

And in late 2012 you created your blog ‘The great novel of Barcelona’, what can the readers find in it?

It’s a website where each week you will find a featured review of a book, it is either written by myself or by any of the people I collaborate with. Apart from this main axis, you can also find short biographies of the authors, an index of works, monographs or links to newspaper articles that I found about the literature of Barcelona. Now I am also working in order to develop a map that places the various stages where different novels take place.

Where does the name of your blog ‘the great novel of Barcelona’ come from?

They say that every great city must have its ‘great novel’. In fact, Sergi Pàmies wrote a book called The Great Novel of Barcelona, an ironic title mainly because it is a compilation of short stories and also because it refers to an academic debate that discusses about whether Barcelona has a great novel and, if so, which one would it be. Other cities do have it and there is no debate around this subject: in Dublin there is Joyce’s Ulysses, New York has Manhattan Transfer by John Dos Passos, London, with works of Conan Doyle or Dickens, Paris has the novels by Balzac…

… Buenos Aires and Borges, Kafka and Kundera in Prague, Stockholm and Söderberg … And in Barcelona, what do you think it could be?

The debate always mentions works like The City of Marvels by Eduardo Mendoza, Private Life by Josep Maria de Sagarra, Rodoreda’s Diamond Square or Nothing by Carmen Laforet. I would add authors like Casavella, Candel, Montserrat Roig, Rabinard, Montalban… Actually, the great novel of Barcelona is a choral portrait, like a kaleidoscope.

Furthermore, after every novel you read, you also publish images related to it and create specific tours: a way to get even closer to all the imagery that each book has to offer.

Yes, that is why I tend to focus on novels set in contemporary Barcelona, especially in the twentieth century, although I’m not closed to historical novels. This continues to be a personal choice because there have been so many historical events that have happened in Barcelona during the last 150 years: from the industrialization of the XIX, the tragic week (1909), years of gangsterism, the bombing of 38, the civil war, Franco, renovations in the 70s until the Olympics. Each of these events has led to several novels.

What do you learn from these readings when it comes to approaching the city itself?

I always try to get close to neighbourhoods or streets where these works take place. So, I found places that I didn’t even have heard of. For example, some corners of I discovered in Zona Franca from books by Candel. I enjoy the experience of discovering a read city, to watch how any street, institution, building or market can end up appearing in the novels I read and thus, creating a link between the experiences of the authors and mine.

This should generate a very comforting feeling of belonging.

That is right. Normally, novels are quite reliable, in the sense that the portrait of their environment tends to be an honest one. Also, when they refer to past, this rootedness you mention arises not only through space but also through time. The readings I propose are also a way to approach the Barcelona of our parents or grandparents, etc. Assuming that they lived here, of course.

Of course. Because, don’t you think that, somehow, there might be something inbred in novels set in Barcelona? I mean, that most of the authors are from here too. The idea of ‘our’ Barcelona is always present: a complicity between its inhabitants that also implies a certain closure towards the outside.

It is true that there is this trend that I think will be gradually blurring because it seems that society is becoming more open. On the other hand, a dictatorship like the one there was from 1939 to 1975, was a very closed phenomenon itself and I can understand that it did not attract a large number of writers and intellectuals from around the world. Moreover, the events of the last century, those that arouse the imagination of writers, they have been so intense and complex in Barcelona than in order to understand all the necessary details and subtleties, one has to either have heard these stories since childhood and therefore they are somehow a part of you, or to dive in a very thorough cultural immersion. I must also say that have still been plenty of foreign authors that set their stories in Barcelona, especially before the civil war. For example, George Orwell or a series of –mostly- French European authors, who came to Barcelona during the 20s and 30s and were very attracted by the port and the old ‘Chinatown’. I would also like highlight the Anglo-Australian writer Mary Low, author of Barcelona’s Red Notebook.

Very often, when I walk around Barcelona, everything surprises me and I feel like Gurb (character in No news from Gurb by Eduardo Mendoza). If another alien, as he is, would like to soak in this city’s literary essence, where would you recommend him or her to start?

By Manuel Vázquez Montalbán and by his recurrent character Pepe Carvalho. With him, you can understand very well how the city has evolved over the last forty years: since the end of Franco (Murder in the Central Committee) to the pre and post Olympic Barcelona (Olympic Sabotage). Then, as Barcelona is a set of neighbourhoods with very specific identities, you could deepen your knowledge of each of them with different authors. For example, to get to know the area of la Salut, you can read Juan Marsé; for the Zona Franca and Barracks around Can Tunis, Paco Candel; the Eixample of Montserrat Roig; Terenci Moix’s Raval, etc. When you start to get into this game, you never want to stop. I have a list of books I want to read, and at a paste of one per week, I have material until 2020.

Where would you like to take the project ‘The Great novel of Barcelona’ in the future?

I am happy to continue to share a different book each week, but in the meanwhile, there are several ideas related to this project that, who knows, maybe one day they will happen. For example, to develop monographs on literature in Barcelona through different themes: authors, neighbourhoods, or one that I like very much, historical periods.

To finish Jordi, you mentioned many books, now I’d like to ask if there are any in particular that you could recommend for Sant Jordi.

New books, because it seems that in Sant Jordi we only care about novelties, I would highlight The vast minority by Miguel Angel Ortiz, which is set in the Zone Franca. I have also heard very good things about Puja a casa by Jordi Nopca. The books that have recently published Milena Busquets (Also this will happen) and Guillem Martí (Burn Barcelona), have awakened my curiosity. Picadura de Barcelona by Adrià Pujol, is a book I really enjoyed and it talks about the current Barcelona, the one of the last twenty years.

And among the great classics of literature in Barcelona, what would you highlight?

I recommend, always, Eduardo Mendoza, I think he is a brilliant novelist, and Jaume Cabré. And Mercè Rodoreda, of course. La Felicitat by Lluís-Anton Baulenas was wonderful and I also like I was Johnny Thunders by Carlos Zanon, Días de Sal by Antonio G.Iturbe, Habitacions tancades by Care Santos, My postcards from Barcelona by Isabel Nunez … I would never end! * 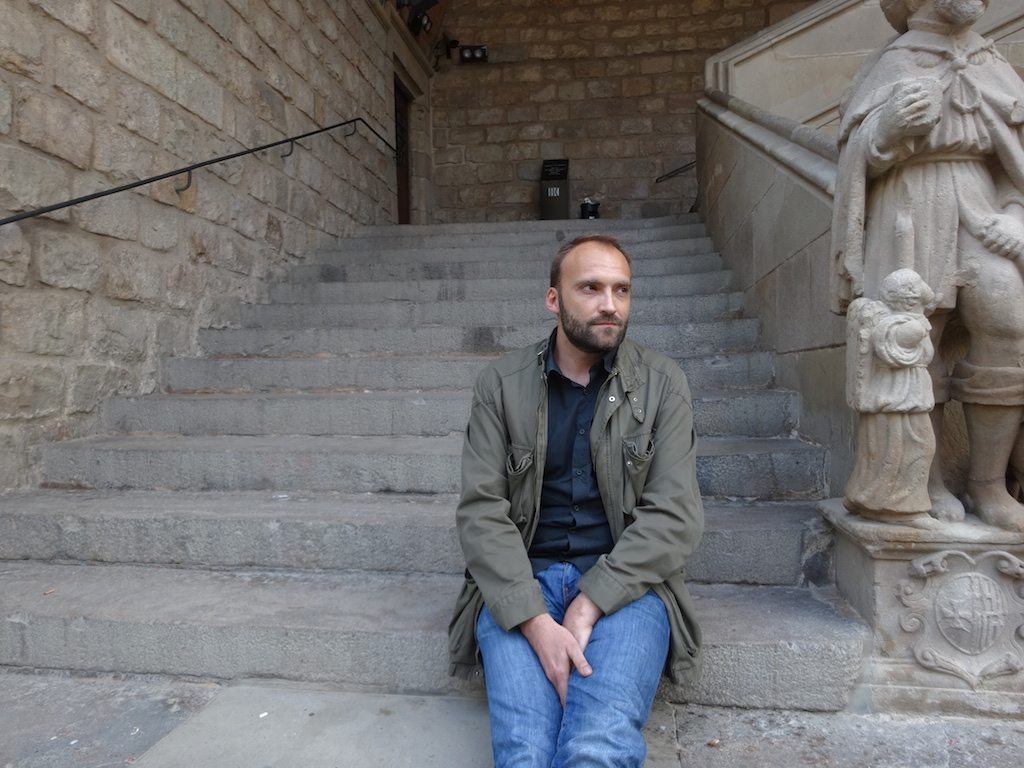 It is very surprising that ...read more 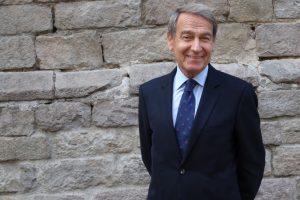 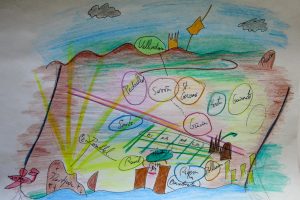