I meet journalist Víctor Fernández Clares (Montcada, 1987) an afternoon of February around the Raval. Not without a slice of shame (in what world do I live?), I confess that, thanks to the recommendation of a friend, I found his blog ‘Amor a l’art’ (Love for art) about six months after Barcelonogy was launched. The discovery of this project created by Víctor and photographer Martí Andiñach, was extremely comforting: I was not alone! People have always had the need to constantly watch other human beings, to reflect us with one another. In the XXIth century and thanks to new technology, this need has been reinvented: more than ever, perhaps because we are orphans of major references, perhaps because we are facing a paradigm shift, we seek answers through the other. However, doing a pilgrimage to the environment of a specific person with the intention of figuring out how they live or how they think and then collecting all that information in a blog, it is not as common. And these are precisely the links between ‘Amor a l’art’ and ‘Barcelonogy’: through conversations, pictures and especially through a fragment of shared life, we have been publishing the collective portrait of an era, ours. After several months in touch through social media, it was only a matter of time that Víctor and I would ‘undigitalize each other’, as he says. The following conversation has been transcribed as faithfully as possible (although I am always rearranging or adding something: these writings, somehow, are also a form of literature). 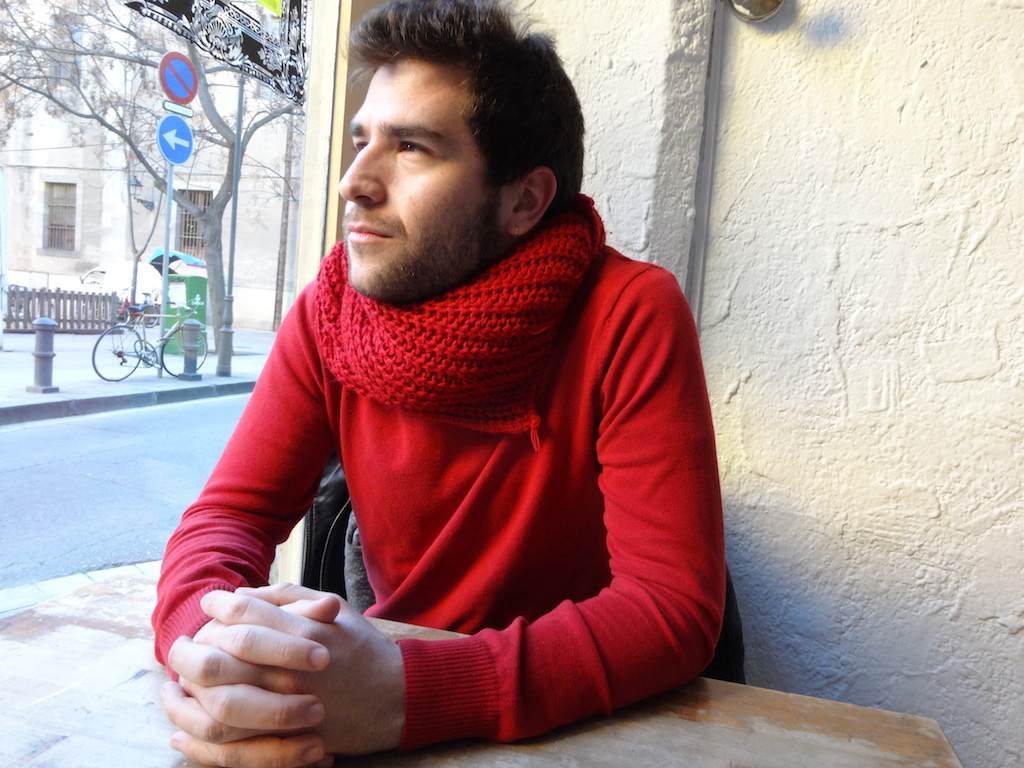 Where did the idea to start the blog ‘Amor a l’art’ come about?

It arose from the advertisement that my partner, Martí Andiñach, placed around the Universitat Autònoma saying he wanted to start a blog related to the art world. At the time, I was studying the last year of journalism and doing radio in my hometown, Santa Perpetua de Mogoda. I used to do interviews with people who called my attention and did not usually appear in the mainstream media. Martí’s idea seemed interesting. So, we met and started to brainstorm. He wanted to do documentary photography…

… And you wanted communicate with words.

Yes. I have always been interested by all this branch of new journalism that emerged in USA during the 60s with references such as Tom Wolfe and Norman Mailer: a more literary way of explaining the world that seeks to capture the reality of a place or a particular character, always from the writer’s subjectivity.

Matthew Arnold already said in the late XIXth Century: ‘journalism is literature in a hurry’. In fact, in ‘Amor a l’art’, besides Martí’s fantastic photos, rather than interviews, what we find are literary portraits that are almost like short stories.

Of course. That was how the project came about: talking and talking, we both saw that our respective interests could potentially complement each other perfectly. We agreed that we would look for artists from different disciplines and we would go to the environment of the person in order to spend a few hours together, just like you do.

Yes, I usually allow the interviewee to decide where the interview should be done. And then, I tend to adapt myself to the amount of time that he or she wishes to dedicate to the interview and the photos, this is very noticeable in the results.

Time is what separates us from the most traditional forms of journalism because we don’t do an interview in 10 minutes: we seek some immersion within the environment and the subject’s personality. The creators of the new journalism wave, sometimes spent months with the people they wrote about. We don’t stay that long with them, but there is always the desire to work in this direction and, as you say, this is perceived in the final piece and it also allows the result to be much freer.

Freedom is one of the joys of having your own blog.

And just because we were aware of this freedom, we spent six months before releasing the blog, defining very well how the project should be and, above all, what criteria we would use when choosing the people we would visit.

Tell me about it.

The common denominator is that we seek people who are very committed to what they are doing. They don’t necessarily have to bring something new, but something very personal and special. We also wanted our glance on the art world to be reflected: we have a particular and broad opinion about what art is: from a painting to an illustration or a tattoo… Art can be expressed in many different ways!

You don’t distinguish between high and low culture.

No. We only distinguish between what we like and what we do not like. As a consumer / spectator, one day I can be watching theatre at the Lliure and the other, enjoying a flamenco show in a hidden place where there are very few people. We try to maintain a fresh glance towards the world, like children, letting ourselves be surprised by everything that we encounter. And above all, we are guided by curiosity.

You have also chosen to create a balance between emerging artists and more established ones, why?

Because they both can provide an interesting and surprising narrative. We have never aimed to seek for a scoop or a headline, we have always focused on each artist’s everyday life. Also in their personality, their work and what is the relationship the artist has with this work. Often, we have interviewed people who have a more combative way to create, who are a part of the counterculture and have a critical eye with the main culture in this country.

So you capture what is behind the scenes of many creators, their backstage. It has also struck me that even though you have interviewed many international people such as Amélie Nothomb or the Cirque du Soleil, your perspective is rather local.

Those you mentioned are exceptions, but it is true that we have always had the tendency to portray people from Barcelona or its surroundings. The local perspective is not an idea that has moved us especially…

… Unlike in Barcelonogy. What matters in your project is anything related to creativity.

This and to visit the artist in his or her own context. If ‘Amor a l’art’ offers a local perspective it is for logistical issues: we need to move around with limited means.

What can you say about the need for us humans to observe each other? How do you think that this need is present in our blogs?

I think now, more than ever, we have this need. We are in a time of great change: political, economical, social… perhaps almost unconsciously, we need to find answers, to be in touch with different views and maintain our mind very open.

What has brought ‘Amor a l’art’ to you on a personal level?

So far, it has been three intense years of great enjoyment. Personally, I have benefited a lot from every experience, every interaction that helps you learn and grow so much.

When people allow you to enter their homes, you cannot feel anything else than pure gratitude, don’t you think?

Totally. That is what keeps you moving forward and then, following the path of all these artists, seeing they continue with their interesting projects or even that following their achievements. This type of work also forces you to stay in touch with what’s happening not only in Barcelona, but also throughout Catalonia. You discover the people that appear in the blog, but also the people they recommend you in those interviews, the stories they tell you, what you encounter along the way…

The joy of being able to keep learning, always!

Of course! In addition (and now I will mix the personal and the professional), after I graduated from University, I did internships in various media and knocked on many doors, but could not find a job. This idea of distributing your CV around to see what you will find, well… I am not very interested in it.

I agree. Perhaps in other environments it can be useful, but for the type of work we have chosen, a CV can be kind of useless.

It can somehow be a bit absurd to simply write down what you’re capable of doing: you have to prove it! I think all you need in order to do journalism is a notebook, a pen and go discover the world. From here, let your work speak for you. You have to be active.

And this is how you were recruited in the SER Catalunya, for a few months now we have been able to listen to your voice in the radio program ‘Espècies protegides’ (Protected Species, Monday to Friday from 12:00 pm, presented by Oscar Moré). The blog is also a kind of portfolio.

Indeed. Thanks to the blog, people know how I write and thanks to social networks, they also know about my personality. Sometimes I like to behave like a clown and sometimes I write rather serious articles. Everyone has various faces and I do not want to hide any of mine. In fact, this was what caught the attention of the SER and then, I was invited to participate in the ‘Espècies protegides’ program. I believe that since we are little, people has told us that in this life, we can only do one thing… However, we are a transversal, versatile and changeable generation.

Speaking of changes, how has the transition between writing a blog and participating in radio?

The philosophy of the program and the blog is very similar: to give visibility to characters from different cultural spheres and not those that are always favored by the media. However, the language is very different, much faster and chopped. It has taken a little time for me to adapt. I’m still writing because I write my daily script, but the pace is much faster and doing a program every day, can be a great challenge, but I’m delighted. I have learned to ask questions in a different way, not to seek answers that require a great reflection or a very long explanation, because the environment simply does not require these sort of content.

And tell me, how has your perception of the city changed since you started with all your activities?

I think Barcelona is culturally very, very rich, but you need to be a little aware in order to access the various cultural layers it can offer. Institutions always have a tendency to give visibility to the same people. So, you have to wise up if you want to go a little further. Here, it is not as obvious or as easy to access the varied and interesting things you can find when you walk away from the general circuits. In this sense, my perception of Barcelona has evolved because through my work, I am more in touch with the city’s cultural diversity.

Finally Víctor, after doing so many interviews, how to you find the experience of being interviewed? In fact more than an interview, we had a conversation here.

Yes, it is all good, for me, being interviewed is an encounter like any other. But I would still rather be the one who asks the questions.* 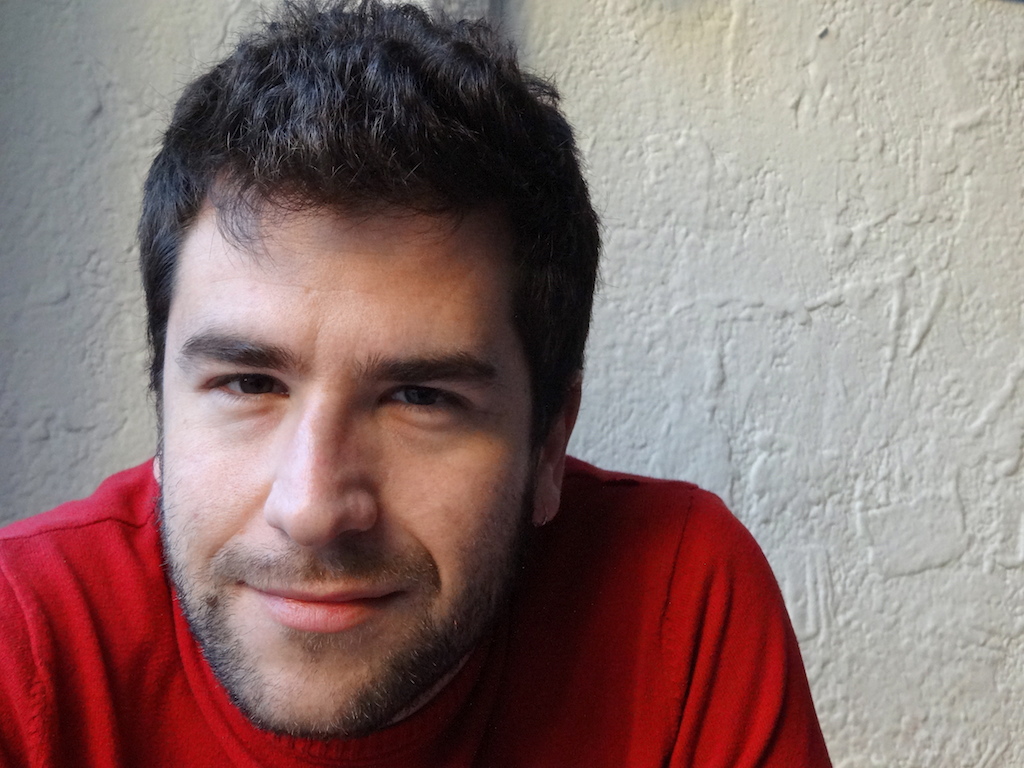 …I tu a comunicar amb paraules.