Giants, in Catalonia, do exist: there are human figures, about three meters tall and they go dancing in the streets every now and then. In Barcelona there are hundreds of them, semi hidden among schools, local councils or parishes. Some of these creatures terrified Nico Alonso (Barcelona, 1992) when he was very young. However, this fear soon became fascination. Today, this the twenty-one year old is the Secretary of the association that coordinates the 32 Giant groups that exist only in Barcelona. We meet at Les Ramblas to and see the Giants that live at the Palau de la Virreina, we visit the copies of the old Giant del Pi at La casa dels Entremesos, a place where are exposed along with many other Giants and figures of beasts, little horses and other Catalan traditional figures. Finally, Nico takes me to meet the original Giants del Pi, sheltered by the entrance of the Church del Pi. These Giants are a tradition to which many locals have never given any importance beyond the anecdote, but this tradition, today, is more alive than ever. While walking through the old city, Nico tells me about the origin, the past and the present of all these great theatrical creatures. 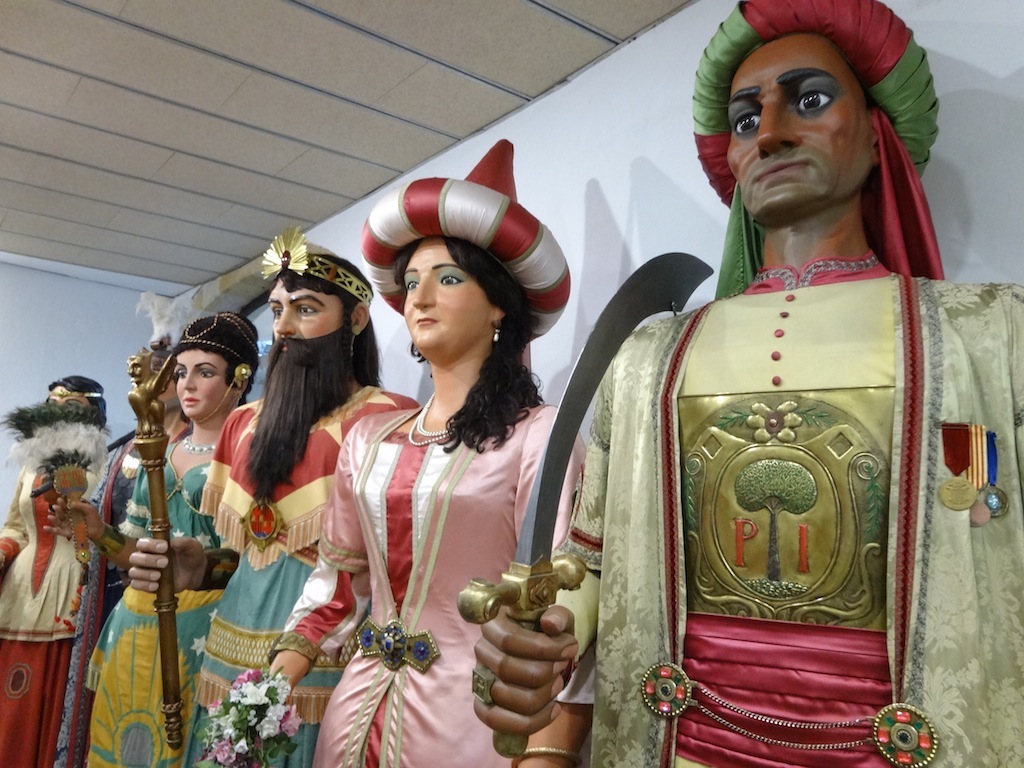 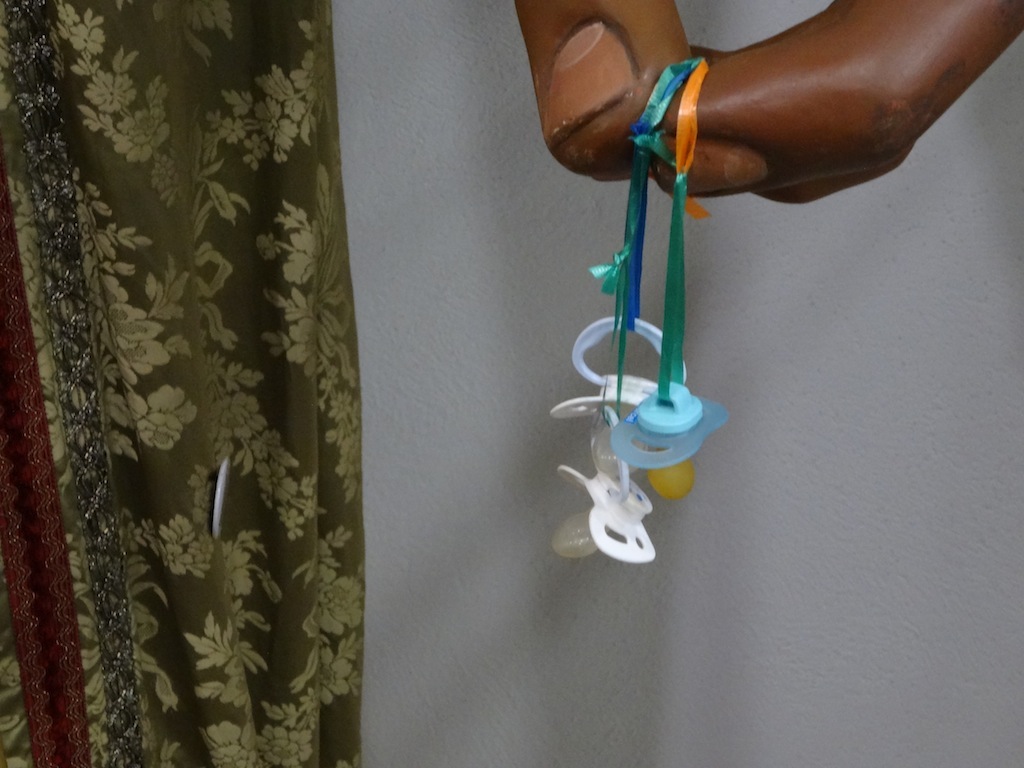 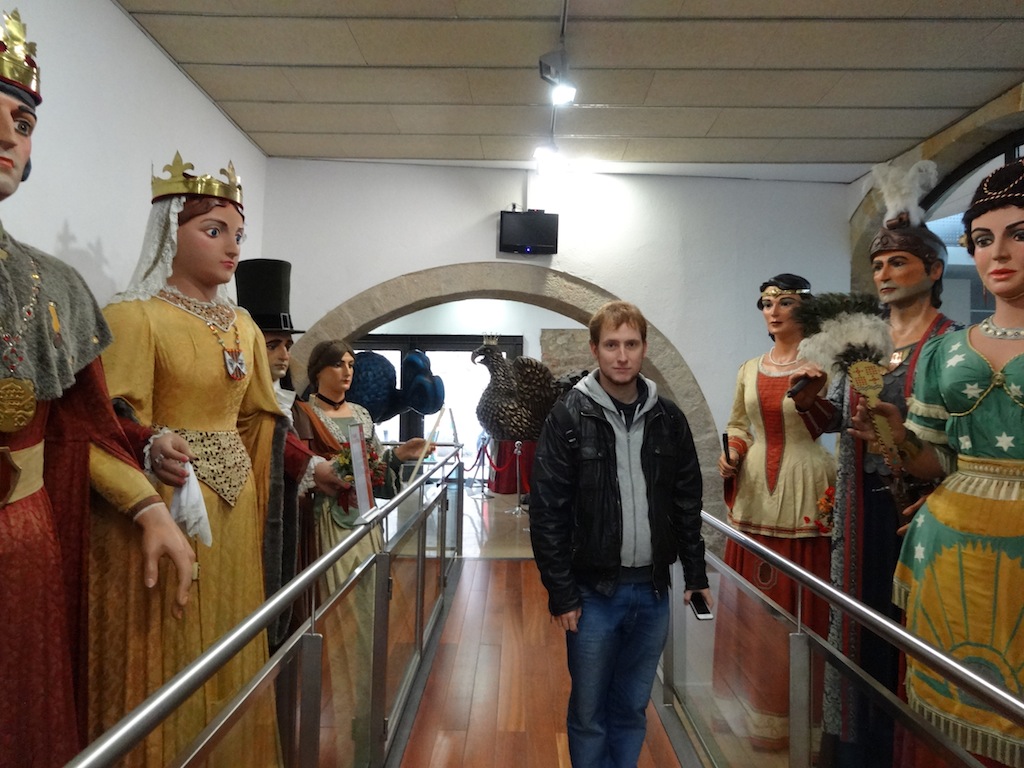 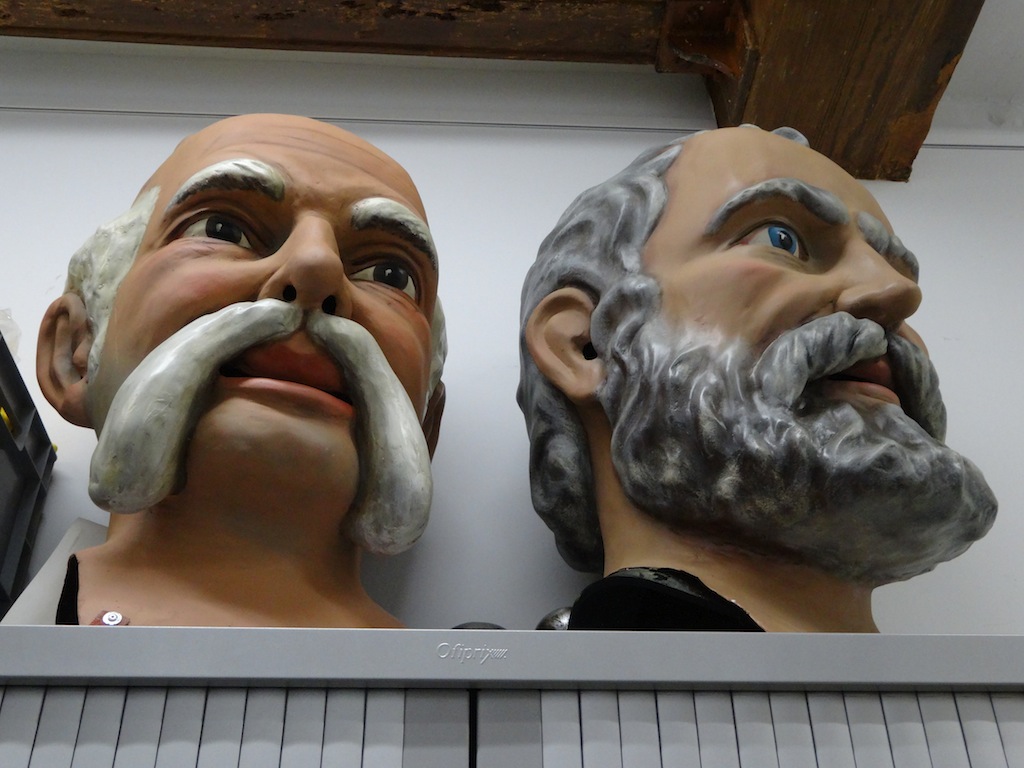 «Giants, in the 18th century, were the only fashion reference that common people could have.»

First of all, a Giant is like a very tall puppet carried by a person, the ‘geganter’ (usually a man), that goes inside it and lifts its structure with his shoulders. These giants here are Mustafa and Elisenda, the giants of the Pi, but they are copies, the authentic ones are in the Church of Pi.

It is the first time I see the actual face of the Giant del Pi: there is a very popular children’s song that refers to him, but I never saw the real one before. Why is he carrying all those pacifiers in his hand?

Because it is a tradition: children give him their pacifiers once they become old enough to stop using them. Also, note that the giants del Pi are practically the only ones that are not in fashion of the 18th century or 19th century. In those times different parishes competed in order to have the best dressed ones. When there were no magazines or other media outlets to spread the latest trends. So, these Giants were one of the few fashion references that common people could have at the time. Especially the female giants: all the ladies waited for them to emerge so that they could see how she was dressed, styled, etc. Then, they would go and copy what they saw in her. The male giants, instead, were often dressed in a medieval fashion, with a bludgeon or a spear and the coat of arms that belonged to the parish or the city. The latter is very important as the Giants always carry the symbols of the city or the village to which they belong. It was also quite common to see the female giant beautifully put together and next to her, the male giant wearing, for decades, the same old apparel.

It is very interesting to observe how the religion (as you have mentioned that many Giants belonged to the parishes), popular culture and fashion converge in these figures.

Yes. Giants traditionally belonged to the parishes because in the old days there was not a clear differentiation between the secular and the religious world and, precisely, parishes also were like a sort of social centres. Besides, the Giants went out to the street for the procession of the Corpus, which was a religious festival. Now days, they go out mostly during the cities festivities that are not religious, but these do not begin until the 18th century. Nowadays you can find giants in parishes, but also in municipalities and even in schools or private houses. There are many children who want to have their own mini giant!

But where is the root of the Giant tradition?

The earliest references of men on stilts date from around 1320. The first documented giant from all over the world was the giant of the city in Barcelona that dates from 1424. That year, the King came to visit the city and everything that happened, was written down. However, there must have been giants well before that. Their origin is also religious since these represented Goliath in the processions and there was also someone who played David. Then there’s the whole bestiary representing different apostles or characters from legends such as the Dragon that St. George killed, etc. From here, the idea evolved and giants who represent different Kings started to appear. In Belgium and in some other parts of France this tradition also exists, but it is in Catalonia where it has evolved with greater strength. I don’t know what is the reason that made it get so rooted here, perhaps among other explanations, it is because the Mediterraneans love the outdoor culture.

It could be. This tradition is closely linked with the Catalan culture, what happened with it during the repression in the times of Franco?

Well, many giants were burned or just disappeared during the civil war (1936-1939). Then, during the Franco regime, all the Giants became Fernando and Isabel of Castile. So, they continued to exists under those names. A few years after Franco died (1975), Giants recuperated the names of old Catalan Kings and a new trend also appeared: they also started started to represent popular personalities of the city, from the fish seller of the Barceloneta to the architect Gaudí. In the early 80s, the passion for these tall creatures really became a social movement in which many families participated: lighter giants were made so that women could also carry them and smaller giants appeared for the children, so everyone could have a role and actively participate in their processions.

In your case, how did you become so interested in this particular tradiction?

As a child, when I saw the giants, they scared me horribly. But then, little by little this fear changed and I started to feelreally drown to them and, by the time I was six years old, I loved giants. My parents weren’t particularly interested in that, but when we saw them in different festivities I just had to follow the pocession. When I was old enough, I joined the giant group (colla) of the Clot neighbourhood and then the colla del Pi. In 2005, when I was 13 years old, I wrote all the text of the book titled ‘Petita història dels gegants i gegantes a Catalunya’ (little story of Giants in Catalonia) illustrated by Pilarín Bayés (Ed.Mediterrània).

And now you are the Secretary of the ‘geganters’ coordinator in Barcelona, what is your job in there?

The association was created in 1982. You know that Barcelona is actually a set of small villages (districts) and there are giants who belong to each of them. All aspects of popular culture work through associations like ours, for example, there is one for the Devils, for the nativities, for popular dancing, etc. People who work there are voluntaries, they just get involved because they love the traditions and they wish to continue them. What we do with the differant ‘geganters’ (a geganter is the person who manages a giant) is that we help them to organize exchanges and to generate links between the differant gropups that exist in Barcelona. Right now, the giants are in a great moment here. We have 32 groups, there was a moment for the Mercè’s festivities (The patron of Barcelona) where only 24 of them could afford to display their giants on the big parade. The others did not have enough participants in order to do so or didn’t have the means to transport their giants. Right now all the groups are participating! That means a lot. We have 250 official giants in Barcelona, but there are plenty of unofficial ones too.

Thank you Nico, I hope that the different giant clubs in Barcelona and all over the world can continue with this vitality for many more centuries! ∗