Manuela Sosa, Gang and the Wool

The days have already begun to lengthen subtly. However, we are in the depths of a winter that, even if it is Mediterranean and quite benevolent, it has still managed to cover with frost all the sides of the paths I cross in order to reach Gang and the Wool: Manuela Sosa’s (Montevideo, 1978) floral studio, located among Vallvidrera’s hills. Nature seems asleep and I want to find out how someone who lives for and from it, works during these colder months. I also want to witness directly the success formula of Manuela’s project: what makes her way of creating so different, how her Uruguayan roots influence her work or what involves being so close and yet so far from the city center. At the end of the day, distances, as time or temperature, are always a matter of perception. 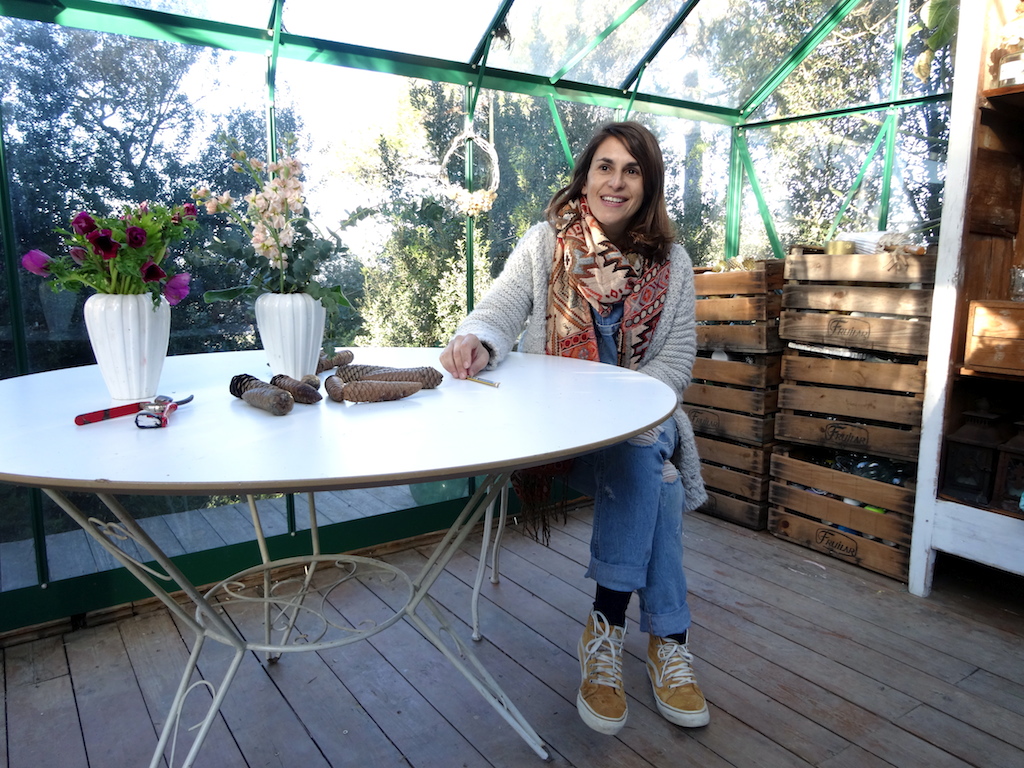 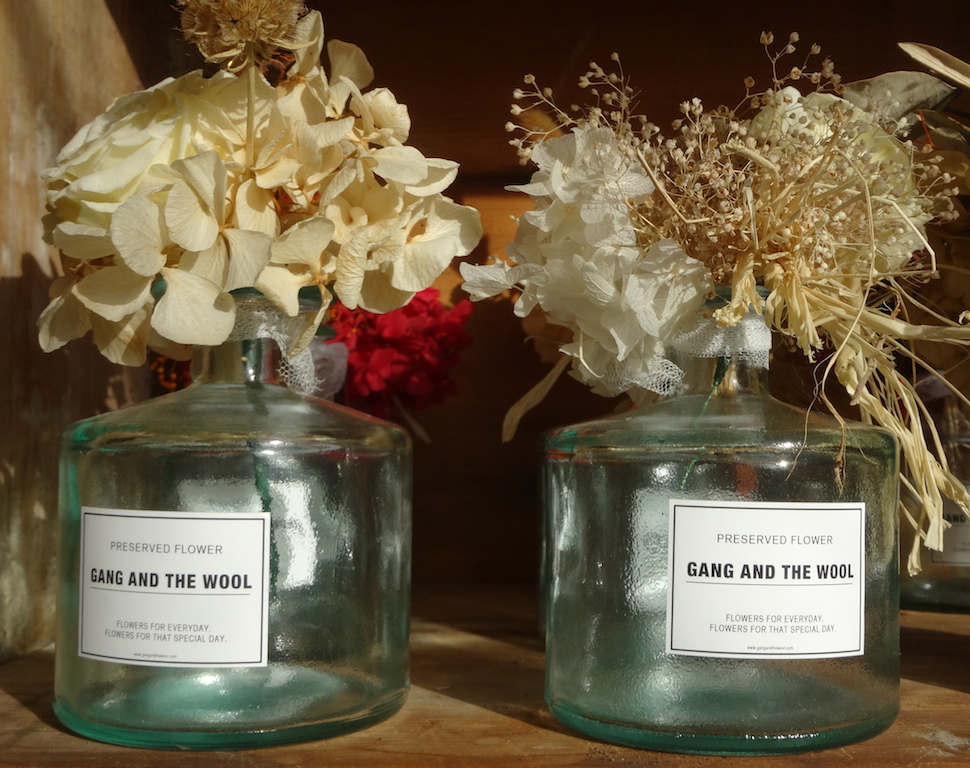 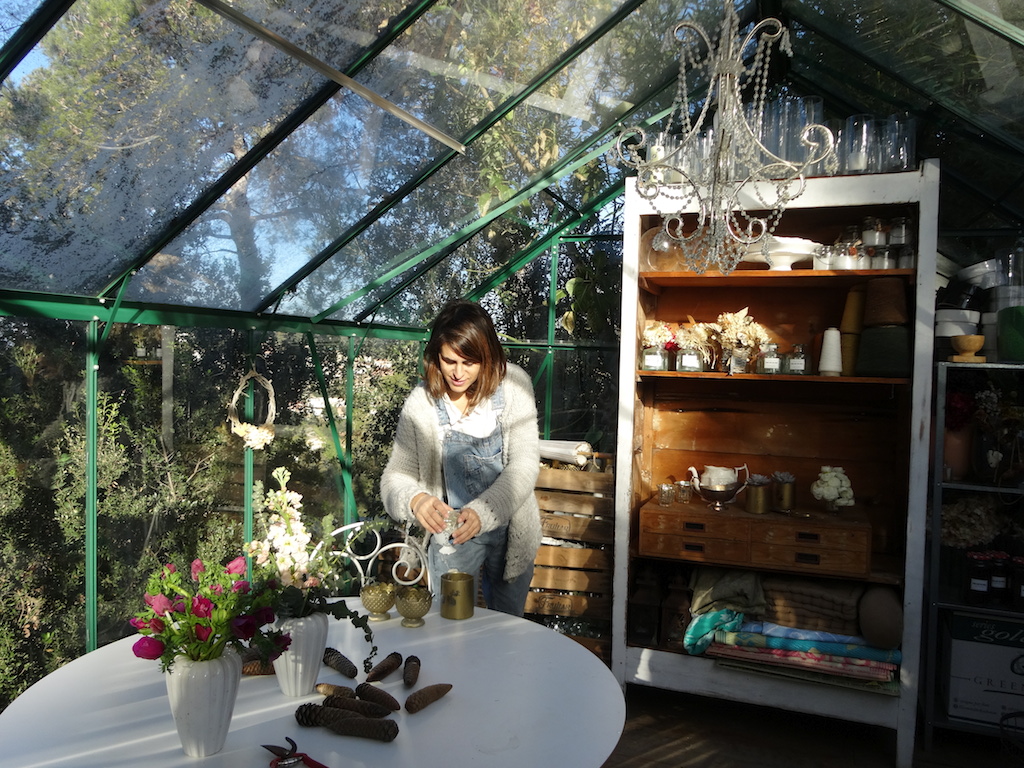 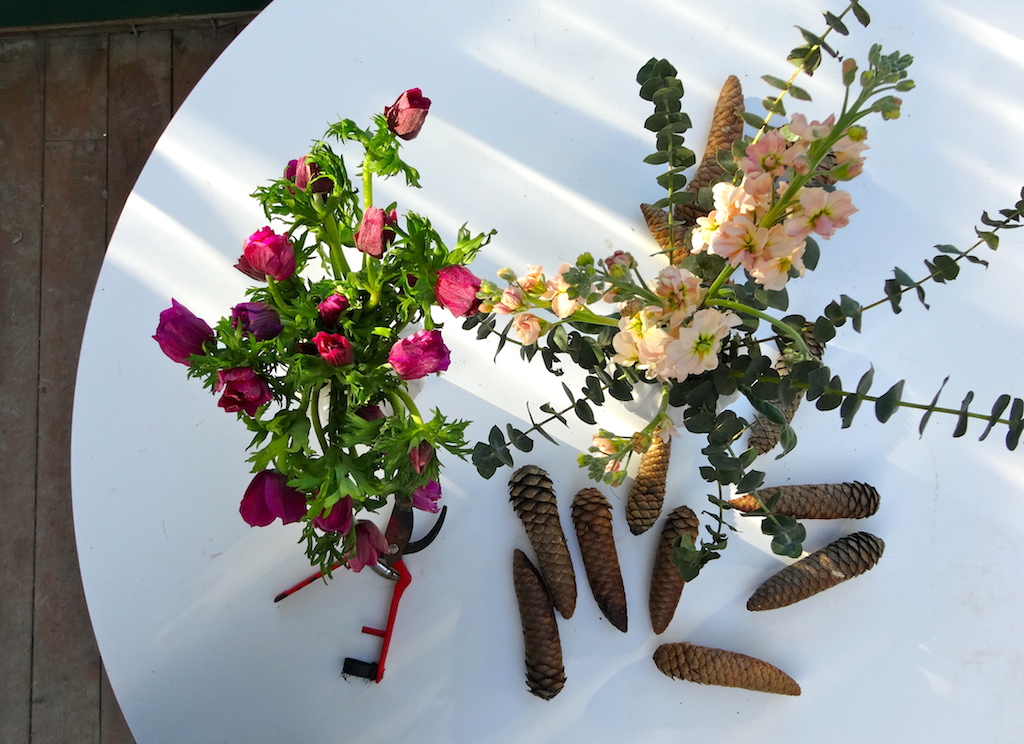 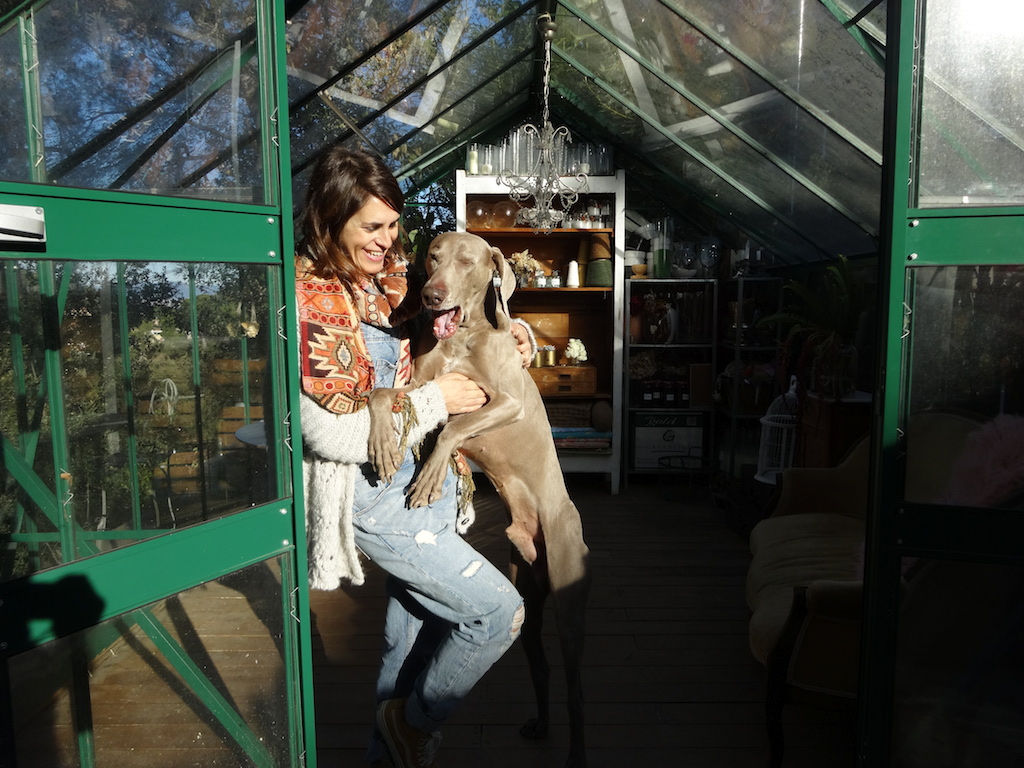 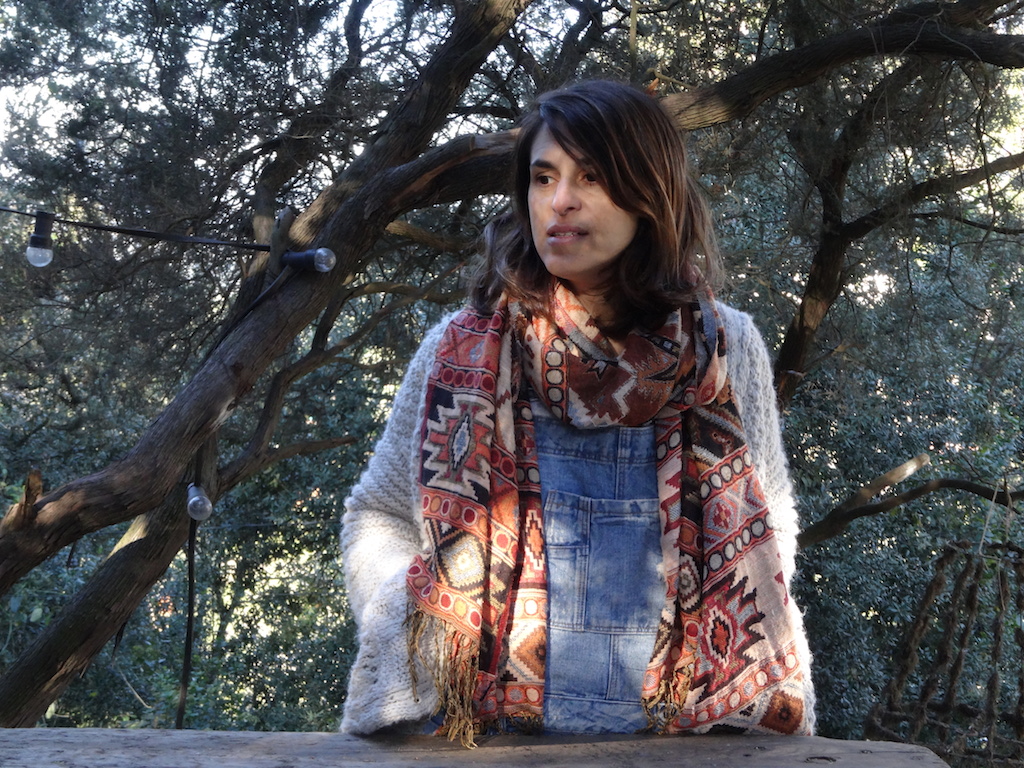 You came to Barcelona when you were very young. What were the first impressions that the city offered you? Did they meet your expectations?

I arrived in Barcelona on a 20th of January. I was 20 years old and I only carried my backpack, nothing else. I knew no one. My first contact with the city was totally amazing: I felt at home, even though it sounds utopian, from the second I stepped in the Prat airport. I had a lot of curiosity and desire to know everything that was around. I think a good predisposition like the one I felt, is what makes you feel comfortable right away.

What basic cultural differences you noticed between Uruguay and the way of life you lead in Barcelona?

The differences between Uruguay and Barcelona are not so much cultural, but as you mention, they are based in the way of life. Most Uruguayans descend from the ships: it is a country built by emigration (mostly from Italian, Portuguese or Spanish origin) that brought its European culture with them. With a population of 3 and a half million people, Uruguay’s main wealth source comes from livestock or agriculture. In 2013 it was chosen by The Economist as the best country of the year. That may be because they had just legalized marijuana, abortion or gay marriage, but I think there is still plenty of room for improvement. I adore Uruguay and it is where most of my family is, but the living conditions there remain quite hard for lots of people and I find it sad that there aren’t being improved at all. Perhaps this lack of dynamism is the basic difference I notice between my country and Barcelona. On the other hand, Uruguay continues to be a beautiful and civilized place, it reminds me of Spain in the 80s: full of wonderful people, very friendly and respectful. There are many fewer social and generational barriers. There is a certain way of doing things and living that comes from the calm and contact with nature, something that may not be valued enough in Barcelona. I try to collect and merge the best of both worlds: a sense of tranquility and a deep respect for nature, but also the energy and adrenaline you get coming from the rush of the big city. The latter is something that, channeled positively, takes you to explore more and more.

Vallvidrera is an area that very few visitors know and it is not usually identified with the city of Barcelona, what do you think about this?

Vallvidrera is Barcelona! More than once, when I organize events or ask someone to collect materials in my workshop, they have told me how isolated they think I am. However it takes exactly 20 minutes by car to get from my house to Plaza Catalunya. I think many locals show their back to the only lung we have and only remember about it when they want to go for a bike ride on Sundays.

It is true. Do you remember the first time you visited these hills? What feelings did you have?

The same feeling I have every day when I go up the road of Vallvidrera to get home: I feel very privileged to live in this environment. For me, to be 20 minutes away from Barcelona, but completely surrounded by green, is something wonderful.

It is clear that you are passionate about nature. Do you think that people in Barcelona have a particular way of approaching it?

Yes. I think for the most urbanites in Barcelona, the approach to nature means going to the beach in summer and skiing in winter. Luckily I think many are also increasingly valuing the wonder of having the natural park of Collserola so close and so well connected by road and rail. Although, as I mentioned before: for many people it is still perceived as an appendix of the city, rather than something that really belongs to it.

How does all your cultural background appear in the work you do? How universal do you think it is to work with flowers and plants or how do your Uruguayan and Mediterranean roots influence you?

I love this question because it contains many extremely interesting things. I think the language of flowers is universal and that is something that amazes me. Everyone understands the connotations of a good bouquet and over the years, this still moves me. As for what influences me in my day to day, it is the Mediterranean nature here that is full of varieties, colors and textures. I am very aware of this and I try to always introduce a touch of wilderness in everything we make. I like working with nature in its purest form, taking the specificity of the environment and the time where we are by using local and specific flowers in each season. Also, I like to use the flowers that are in their full bloom at the time of the event or ceremony, we must not forget that they are living beings and there is where lies their charm. It is a way of working that is not very developed here, but for me it is vital. My way of understanding floristry started when I was a child and my mother used to take me to collect all kinds of plants, berries and wild weeds, afterwards we would dry them ourselves in a shed all hung upside down or in books.

We are now in the coldest month of the year, nature is asleep. What does the winter represent for you and how it affects your work?

I think all the seasons of the year are lovely, I enjoy every one of them. Spring brings odors, colors and varieties; summer gives me eternal blue skies and fall’s colors are a real beauty. Winter is a time for calm and introspection that I find indispensable. On a practical level, it is clear that working as a florist, winter is usually the hardest season, both for its inclement weather (we work outdoors: if it’s cold, we are cold and if it rains, we even get wet) as well as the fact that many varieties scarce. If, like me, you work with local and seasonal material, what nature offers at this time of the year is not small, but it is more limited in variety and in color saturation.

I guess now you’re also charging batteries for when the spring madness starts. Any upcoming project you feel like sharing?

Many… Luckily the year 2015 that has just began, comes loaded with new and exciting projects that will allow us to grow and learn a lot. In addition we will continue creating unique and unusual wedding decorations: full of wild and natural romanticism, but also with a casual touch.

We talked about Uruguay and Barcelona. However, correct me if I’m wrong, but I think much of your universe is concentrated in this glass house that looks like something out of a fairy tale. Tell me about this place.

Indeed. My project, Gang and the wool, usually develops in the Green House that we brought from London, it is my studio and my flower shop. My specialty is weddings. From here, we offer a total service of decoration for your day. We pursue the goal of building a feast for the eyes, ears, nose and even the palate. It is something that goes beyond ‘decoration’ or simply choosing chairs, food or textiles and, of course, flowers. Although these elements are part of the equation, we strive to create something soulful. On special occasions, I also like opening doors and offering private dinners and lunches, workshops with flowers, photo shoots, green trends advice, garden design. We also make decorations for hotels, among many other things…

I see you don’t stop, not even in the winter. Finally Manuela, flowers have always been associated with femininity. What do you think is the masculine approach to the floral art; do you believe there has been some change in it during the recent years?

Flowers have always been associated with universal beauty and I will remain with that idea. I believe it doesn’t matter who is the person working with or receiving flowers. Whether male or female, the important thing here is the sensitivity transmitted through this craft, the style you want to achieve or the value you chose to give to any floral arrangement.* 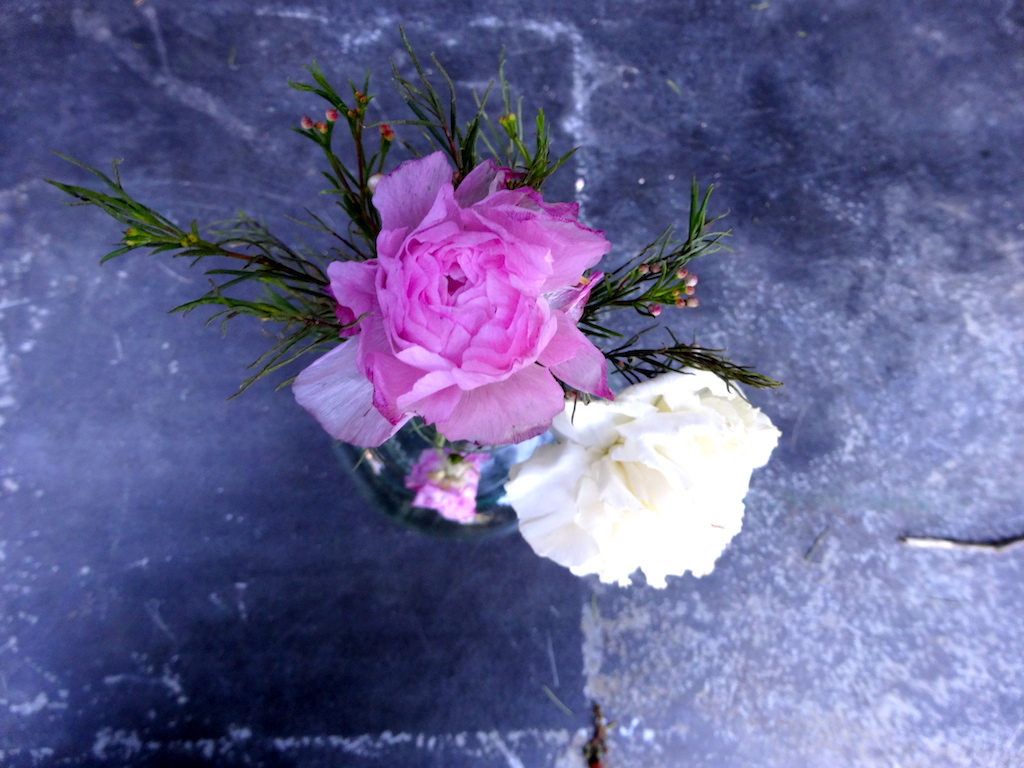