I arrive at the studio of architects Flores & Prats and I am surprised to find a bicycle bell on the door. ‘It is a reminiscence of the civil war’, explains Eva Prats (Barcelona, 1965) ‘from the time people had to manage with constant electricity cuts’. She and Ricardo Flores (Buenos Aires, 1965) show me around their studio located between Carrer Trafalgar and Carrer d’Ortigosa, while we comment their various projects through drawings and models displayed alongside a collection of curious objects: a Mexican virgin, colourful edged papers, old Japanese toys or Chinese dragons (they became fond of those since they discovered the shape of a dragon on the studio’s hydraulic floor.) For this interview, I focus on two of their projects. The first one is not a building but an exhibition that took place in Autumn 2013 in Copenhagen. In it, they presented the whole work process that is behind one of their most important works: the building 111 in the town of Terrassa, a social housing building that is formed by 111 apartments. This exhibition allows us to talk about how important the work process is in architecture and how it changes when the project is done locally or in the distance. The second work that I focus on, will soon transform the panorama of Barcelona’s performing arts: it is the reform of the new Sala Beckett, in the former building of the Consumer Cooperative Pau i Justicia, in the Poblenou district. 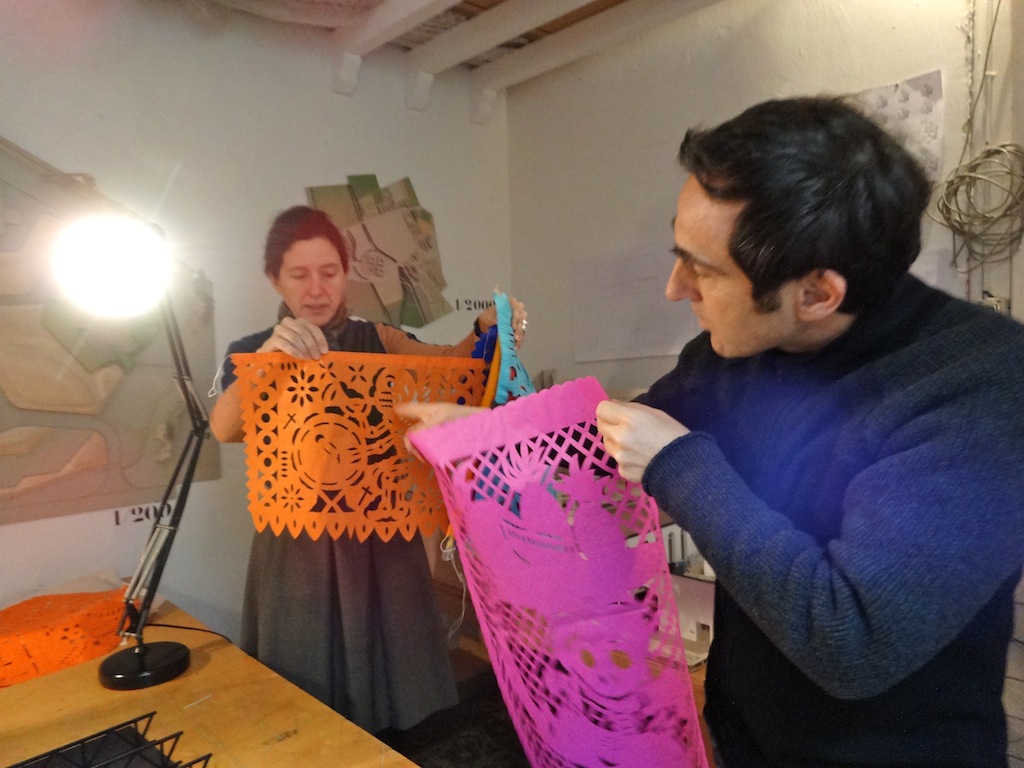 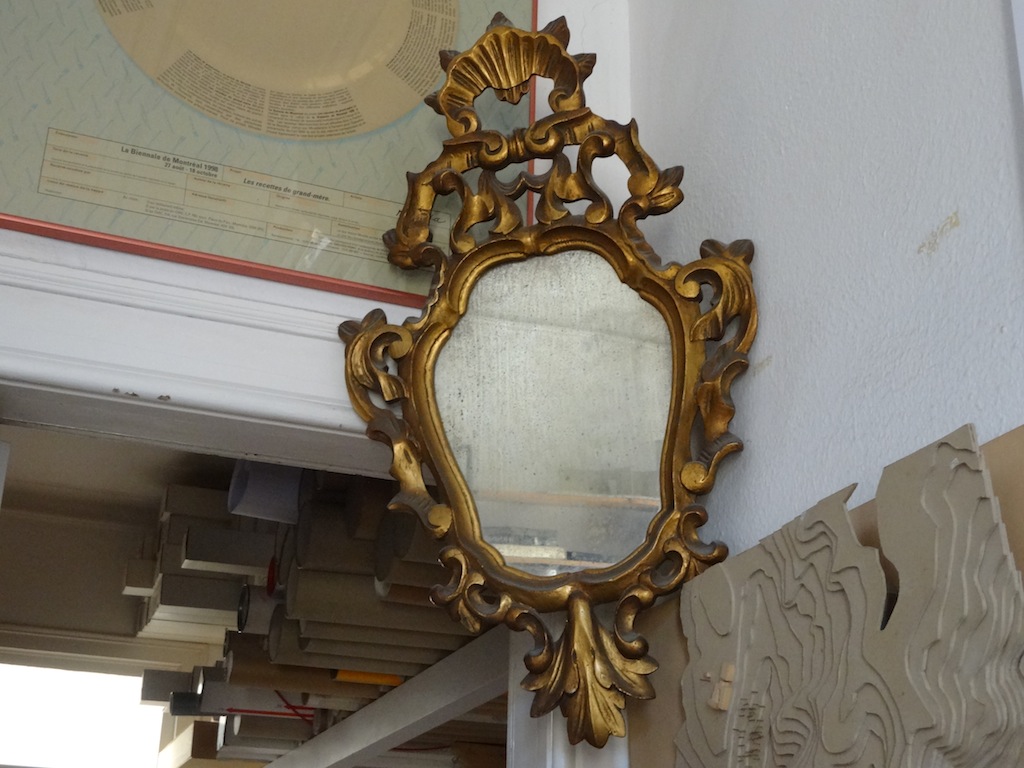 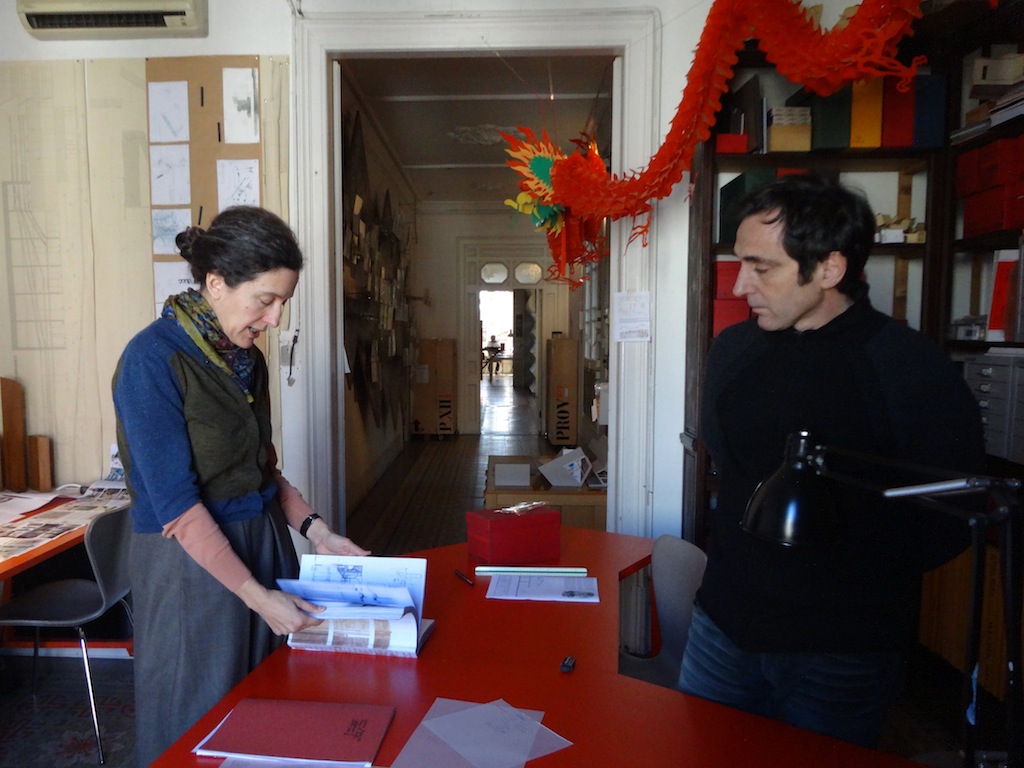 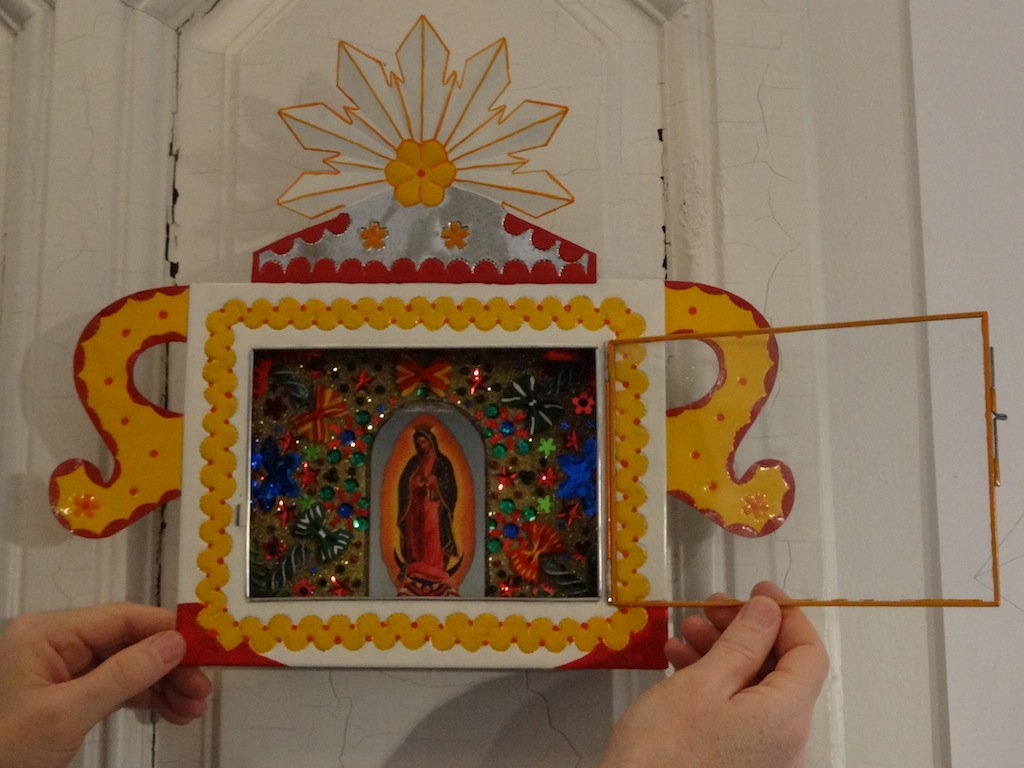 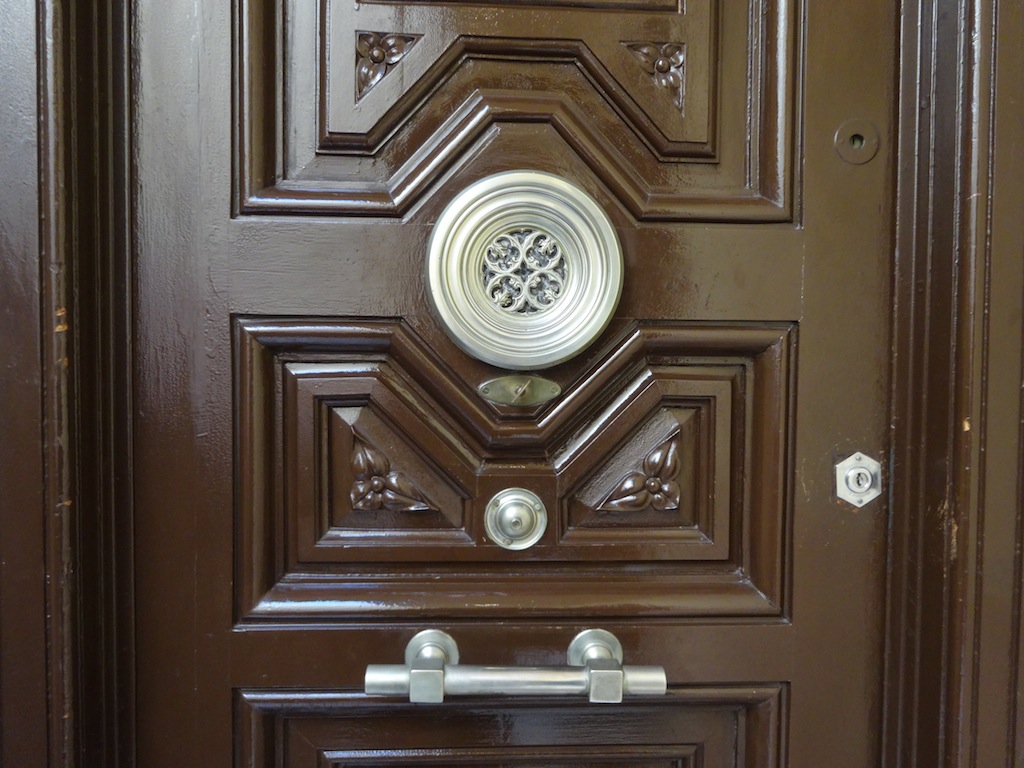 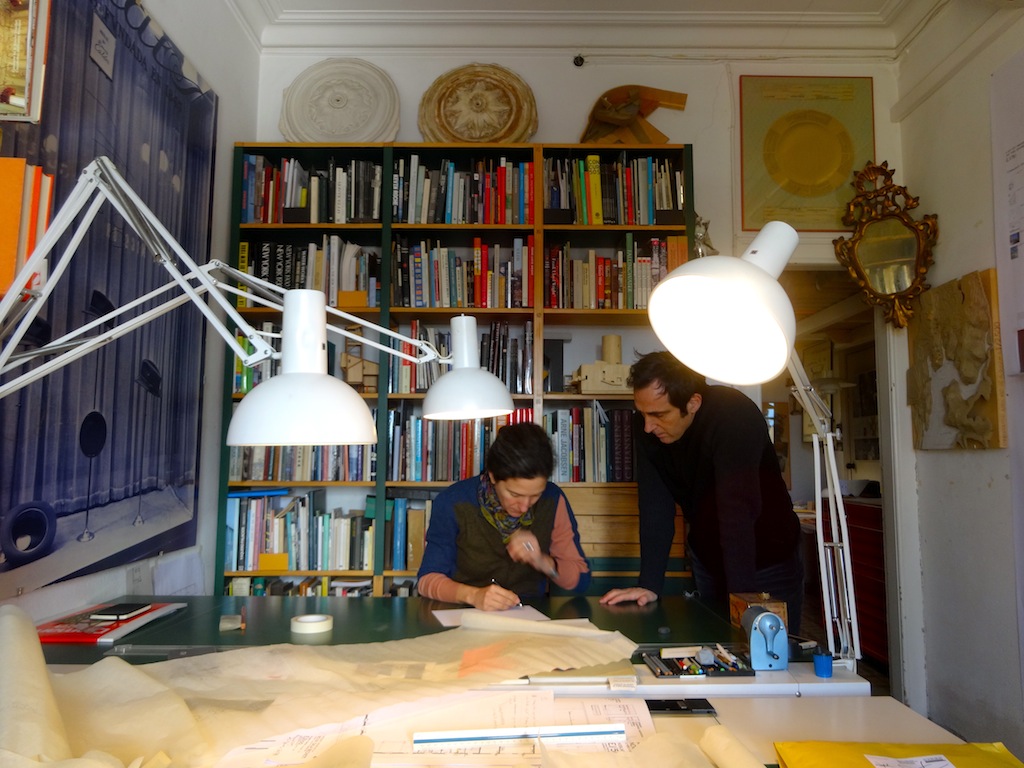 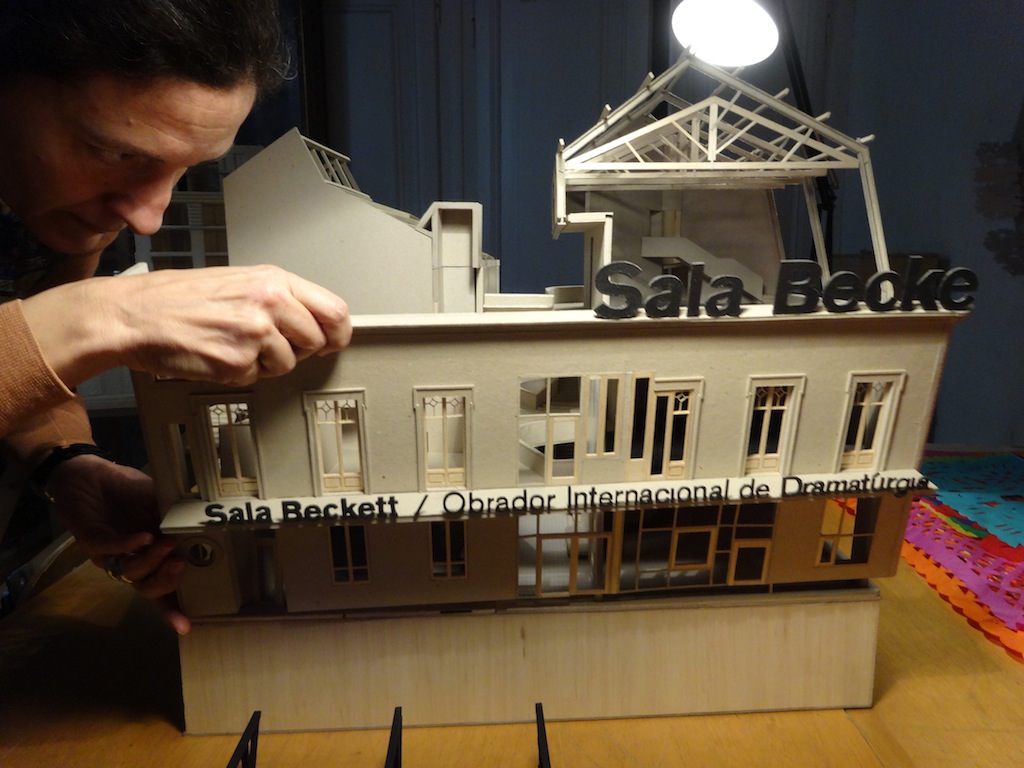 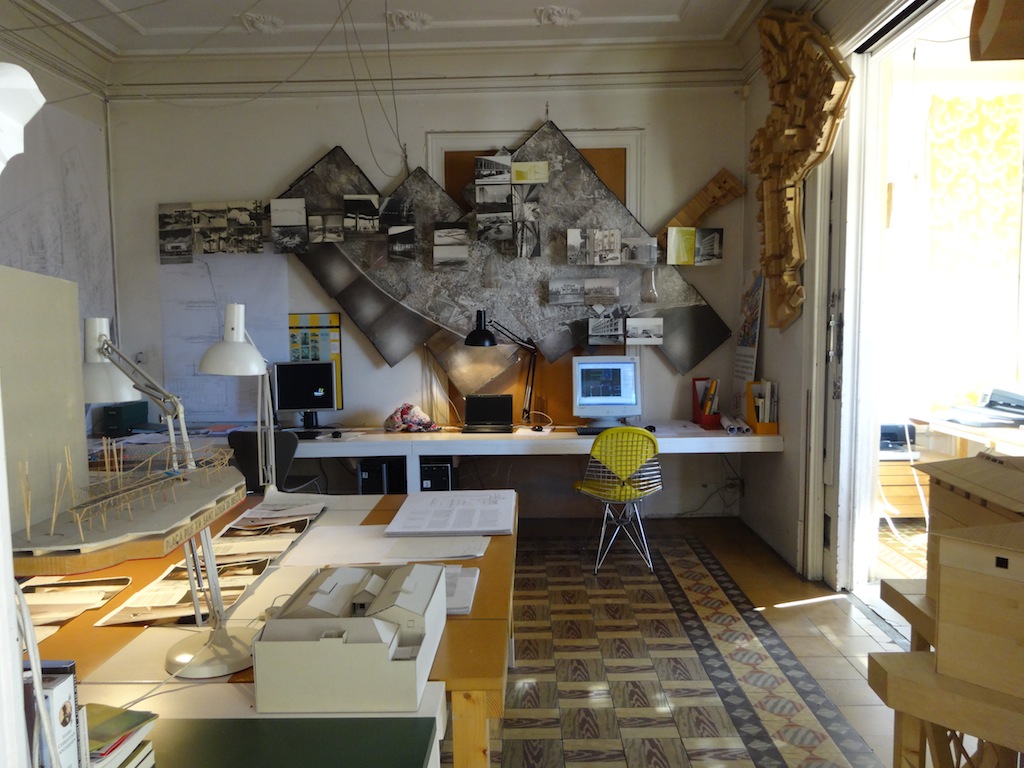 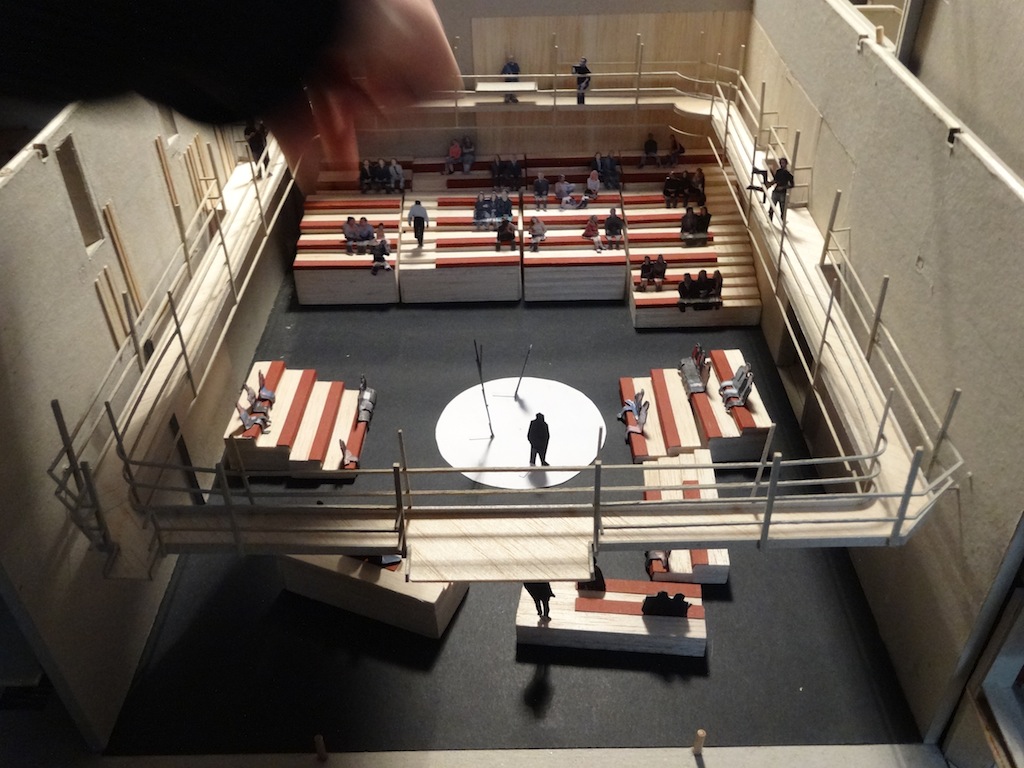 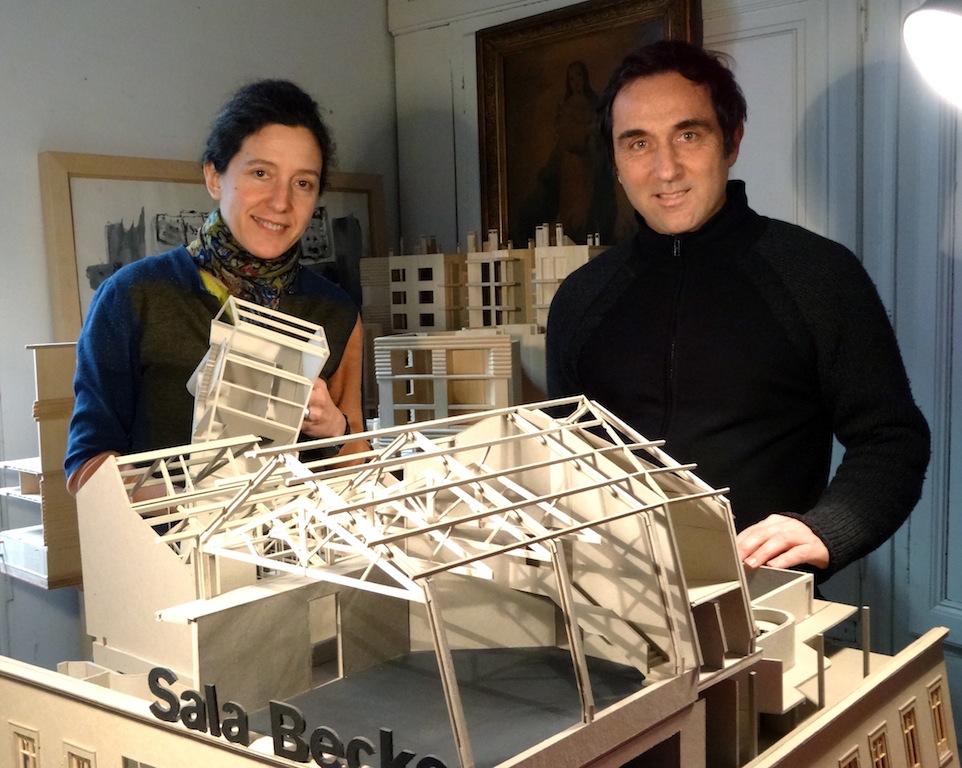 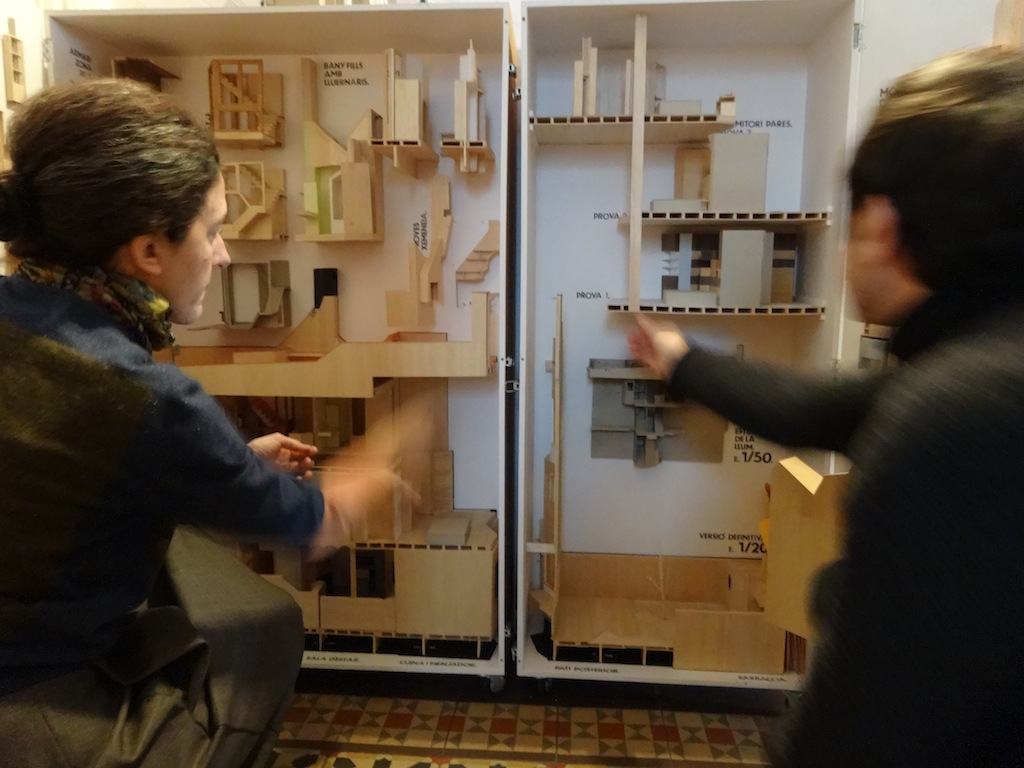 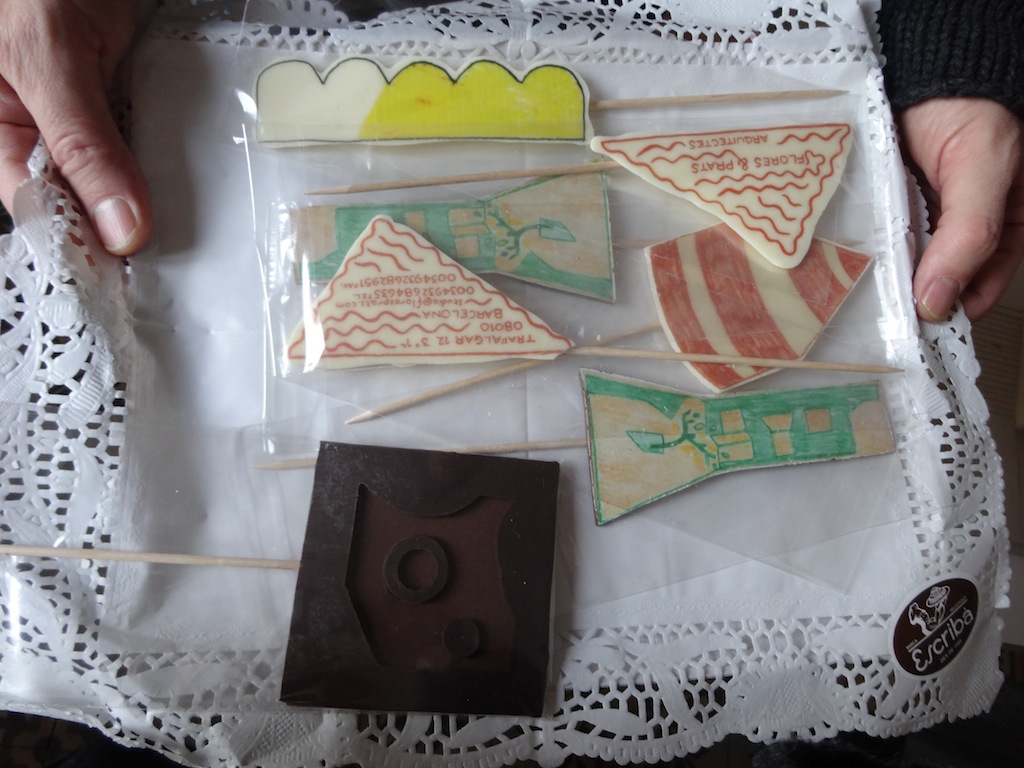 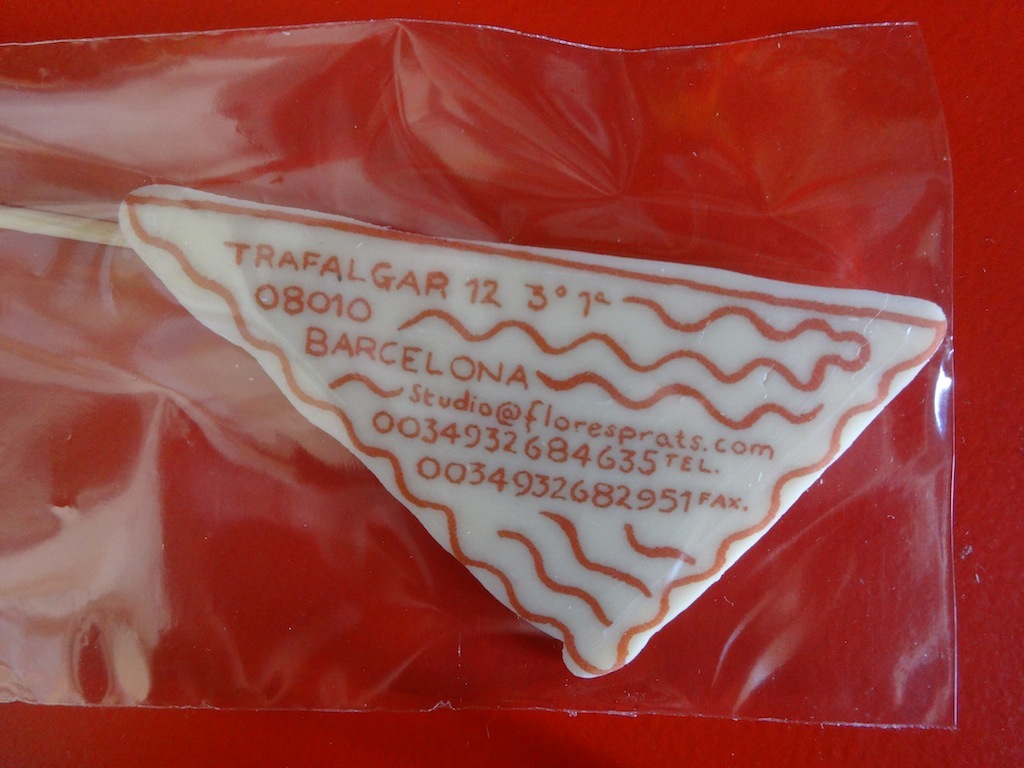 Before we start, I would like to know how the two of you met.

Eva. We met working at the studio of the architect Enric Miralles (Barcelona, 1955-2000). He was my professor in college and at twenty, I started working in his studio while I was still studying. I remember that he and the architect Carme Pinós (Barcelona, 1954), who was his partner at the time, seemed very old to me, although they were only ten years older, but they could draw freehand anything they wanted. I spent nine years working in the Miralles’ studio, until I slowly started to leave. Ricardo arrived the year before I had completely left.

Ricardo. It was hard to leave that studio; it had a dynamic that somehow kept you hooked.

Eva. Yes, because there was a very cordial atmosphere and a great respect between peers even if the work was enormously demanding because Enric was very demanding with himself, so he transmitted that to all his team.

Ricardo. True, I stayed about five years after Eva left. I began to take responsibility within the office: I took care of the studio and the competitions. When I arrived in Barcelona there weren’t many projects going on because it was the time of the post Olympic crisis, but things started waking up until we started having a lot of work. I had come from Buenos Aires to Barcelona in order to study my masters and to learn from Enric. I believe that when you finish university, you need someone experienced with who you can spend an intermediate stage until you start developing your own projects. I was very fortunate to have Enric Miralles as a teacher.

Eva. I agree, this stage is very important. I thought about studying a master in an American university (Enric was also teaching a few courses at Harvard), but I chose to learn from him working in his office.

Of course, learning directly from him as a professional, not as a teacher anymore.

Ricardo. At that time, he set up his home in Ciutat Vella, by the Santa Caterina Market. It was in a former palace that he began to remodel. While we were working in there, we found old murals and structures hidden within the building and we approached the city’s history by working with the layers that time had been leaving in those walls. Enric taught us to deal with old elements without any distance. This approach has later been very useful for projects such as the new Sala Beckett because we aim to incorporate history into everyday life, we want to make it useful.

Eva. And twenty years ago that area had nothing to do with what it is now. I still have very vivid memories of dark streets and very few people in them or stolen bags hanging from balconies: thieves took the money inside them and threw the bag up in the air while running away. There were still many carpenters or blacksmiths that worked there and the streets were always full of packing boxes.

Ricardo. When I arrived in Barcelona, in the early 90’s, there were still abandoned places that were very attractive, for example, the theatre that is just behind the CCCB (that the architect Elias Torres (Ibiza, 1944) rehabilitated in 2011). I loved watching those half-ruined buildings because you could easily see all their internal structures. I also enjoyed discovering Barcelona’s traditional hidden places such as La Paloma. In the last twenty years the city has been very smoothed and formalized.

And during these last twenty years, you have gone from being Enric Miralles’ disciples to consolidating your own studio. I use the word ‘consolidation’ because beyond all the buildings that you have already raised, explaining your own trajectory in an exhibition as the one you did in Copenhagen, also means consolidation. Could you please tell me about it?

Eva. Yes. There were actually two exhibitions that were complementary because they both explored the social dimension of housing. The first one was located in the Exhibition Hall of the Royal Danish Academy of Fine Arts and it was called Meeting at the Building. There, people could see all the elements that belong to the creation process of the building 111, from its initial drawings and miniatures, to videos such as the one we co-produced with 15 -L films, about the way that the building’s neighbours interact two years after its construction. We also displayed other cases of social buildings in both Barcelona and Copenhagen.

Ricardo. The second exhibition was called Ingredients & Cakes, it took place in the gallery and studio of architects Leth & Gori, a space that had formerly been a bakery. We wanted to do something related to its history so, in order to complement the materials of other projects previous to the building 111, we also offered cookies and chocolate lollipops made out of shapes of the elements that can be found in these buildings.

How was the experience of organizing everything from Barcelona?

Eva. We had to think very carefully what we could bring from Barcelona and what we could prepare directly in Copenhagen. In the case of the cookies, we wanted them to be made in the canteen that was by the exhibition, but when its chef saw the shapes that we wanted to make, he thought he wouldn’t be able to do it. Instead, we went to the Escribà bakery in Barcelona and we explained the idea we had. They immediately reacted with enthusiasm and they also helped us a lot by giving us tips on how to transport all the chocolate and cookies all the way to Denmark. They have a very dynamic team.

Ricardo. Preparing this exhibition was a fantastic experience and a long and laborious process too. There was a lot of research done in order to find the best way to present our work because we wanted people to understand the process of creating each building, a process that usually takes several years of work.

The creative process is very important for you. People often just care about results, but you can say that the process has already a lot of value in itself.

Eva. Absolutely. It is the process what gives meaning to the final work and we value that a lot. We don’t want the process to vanish after a building is completed. To us, all the work of craftsmanship in each miniature or in a drawing, has importance beyond an instrument to facilitate construction.

Ricardo. Yes, the process is a great way to express how we get to the final result. It is full of errors and corrections, but that is what makes us move forward. We keep all the models of each project in wooden chests that contain miniatures from the initial idea to how it evolved towards the final building. It is a great communication tool for both our clients and for the students that can see a clear and practical example of all these processes. In fact, in early 2013 our students displayed in the sala Vinçon, in Passeig de Gràcia, some of these chests containing the entire process of their degree’s final projects, it was an exhibition titled Memorias portátiles.

We just talked about creating something in the distance, you have done many projects in Barcelona and its surroundings, but also in Germany, Denmark and Italy. How would you contrast the fact of working as a local architect vs. the figure of the international architect?

Eva. It varies in each project. In the case of the Exhibition we did in Denmark, we could have worked directly with people there, but it was easier to find support from here like the Escribà Bakery, the laboratory EGM that printed the panels or our friends who work with wood and built the tables for the exhibition. All of them dared to produce on a large scale and with very high quality.

Ricardo. When you create something in the distance, you do not dominate the panorama in the same way, and if you don’t bring your own team with you, it is more difficult to establish solid bonds with the people you work with. You must always be present, because otherwise a project can take its own way beyond your control.

Eva. Proximity also changes the entire creation process, not only because your work has to be functional and harmonious in itself. Also, because you know very well about the environment where that project is going to be set. That means you work for specific group of people with their own parameters and subtleties. We are now working on the reform of the sala Beckett and it is a luxury to visit it whenever we need to because it is only a few tube stops away from here. In fact, we are going there in a little while, would you like to come with us? ∗