In a time in which reinventing yourself is almost a fashionable thing to do, Bernat Sans (Barcelona, 1981), is an expert in this subject. I accompany him on a tour from the Eixample (in the centre of the city) to the sea while he tells me about his work as a social integrator. He also describes a very intense journey that has led him to think deeply about the barriers that are spread around the city: we mainly see the architectural ones, but there are others that are invisible, those in our minds. We also talk about these. 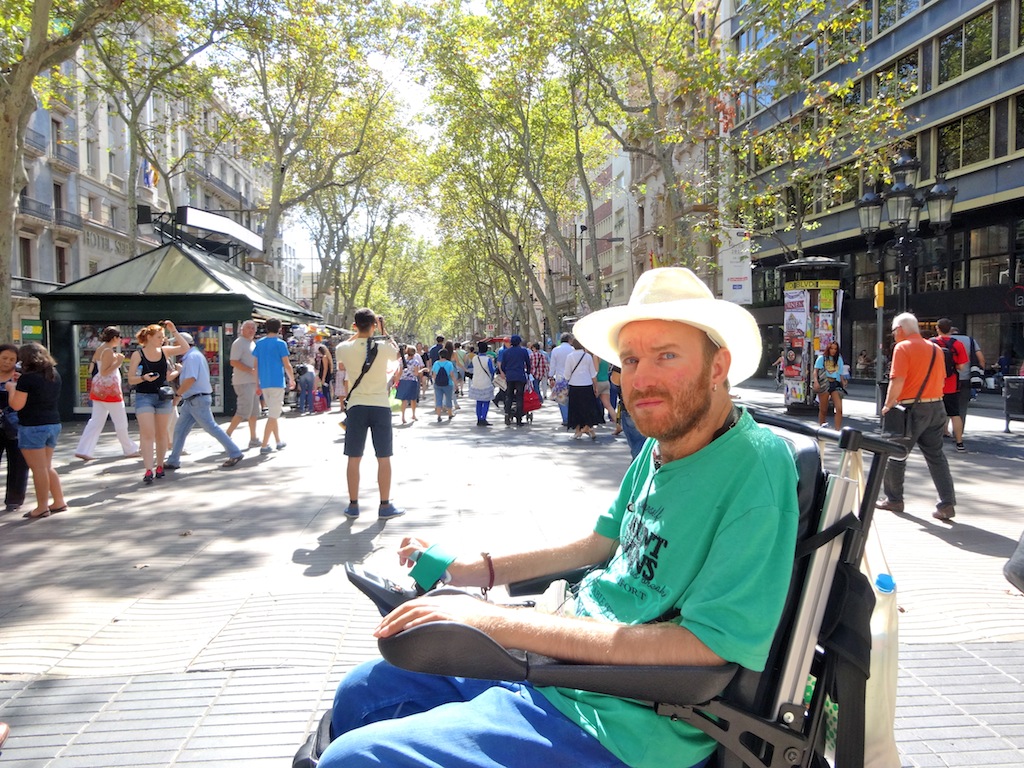 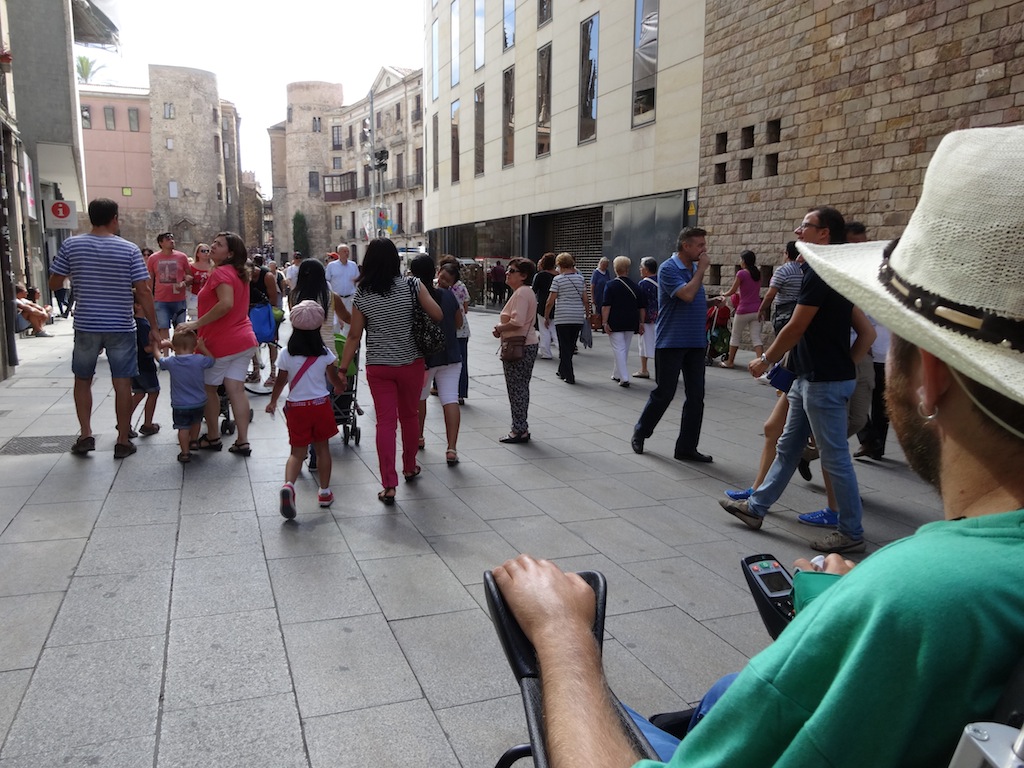 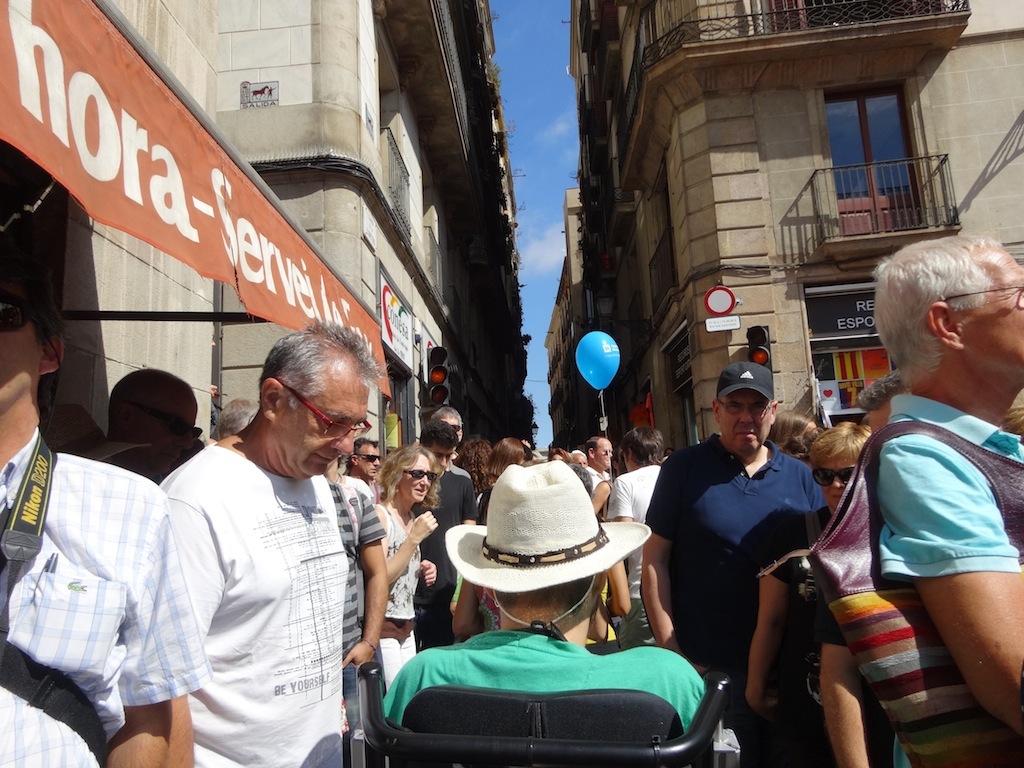 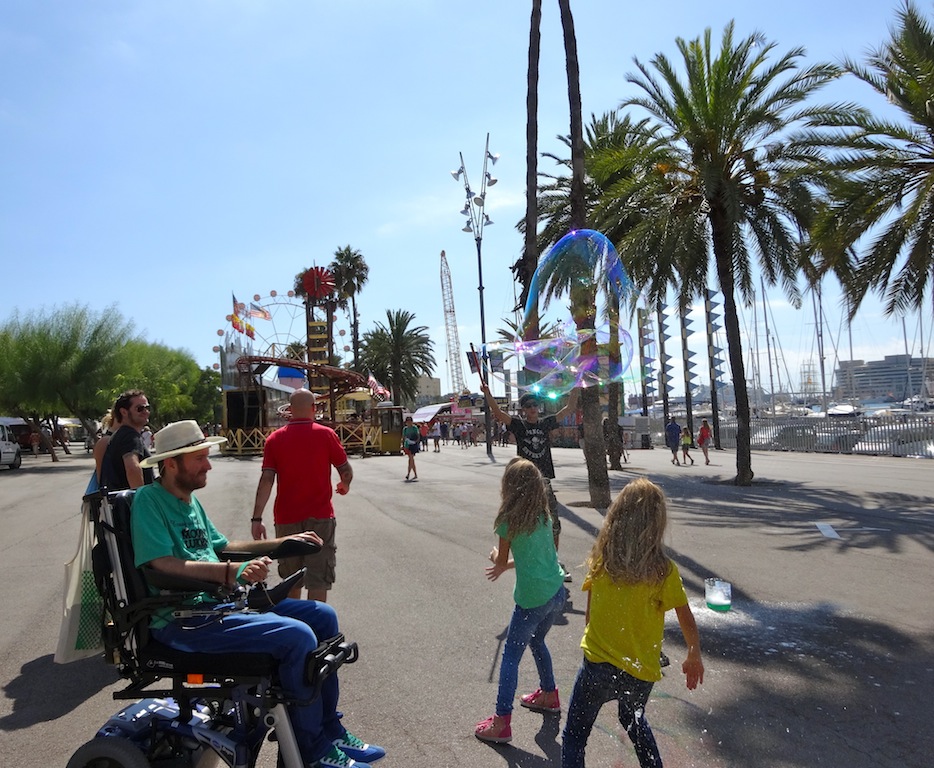 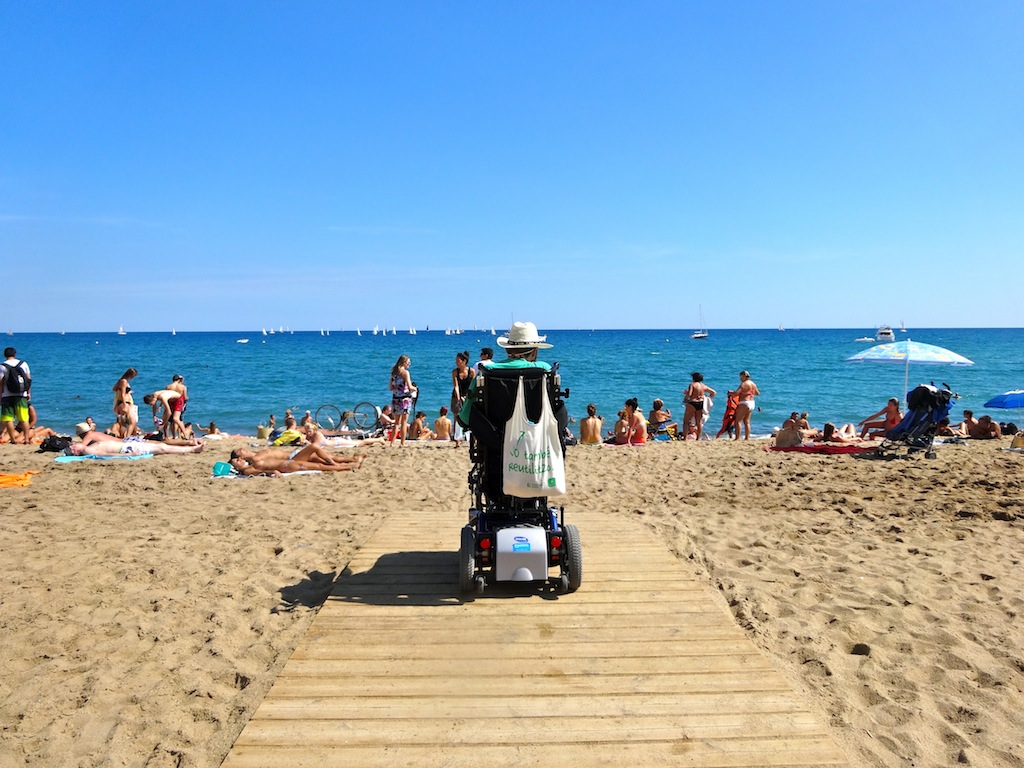 «Do not allow people to mark your way, because it is you who does the walking.»

Do you love Barcelona?

Oh, what a beautiful question! How could I not love it? It is where I was born.

That doesn’t mean anything, there are people who address it in a very critical way.

I don’t. I love it because I am a part of it and because I have been working in order to try to improve it.

In terms of accessibility. It is one of the subjects in which I have invested more time and effort in the last few years.

Do you mind if we do a small flash back?

No problem. Seven years ago I had an accident and I became a quadriplegic. Before the accident, I was a mountaineer and my future was focused on being a mountain guide. In short, I will tell you that there are things we have to learn, I think that everything happens for something. It took me a long time to reach this conclusion, but I’m pretty convinced that I can be more useful living on a wheelchair than doing the life that I could have had in the mountains.

Now you live in the Eixample, the centre of Barcelona, do you miss the nature?

I’m happy because I found areas with gardens, lawns and trees. Of course that is not the same, but I also like them a lot: Carrer Enric Granados, Plaça Castella, the sea … Oh, the sea! But lets go back to the subject of accessibility.

Yes. Barcelona, is it accessible?

‘Accessible’ is a very good word because it implies that it is not only for people that goes on a wheelchair, but also for everyone: the elderly, people with shopping carts, strollers, suitcases, carriers, etc. In terms of accessibility, Barcelona is pretty good, but there is still a lot of work to do. It is important to claim these improvements in a happy way, rather than from resentment. For example, if you find a place where you cannot access, you should speak with those who are in charge and make a proposal, it is useless to go around with an angry attitude.

So, suggestions, not complaints.

Exactly. I’ve achieved a lot more facing things with a positive attitude, but more than this what you really need, always, is to insist and go yourself to places, people need to see your face, to see that there is a person behind a name or a number, or a piece of paper. Sometimes you also need to make a little bit of noise, with good faith, but you need to create situations that will help people realize that there is a lot to be improved.

What do you mean?

For example, the other day I wanted to buy some new shoes and I couldn’t access the store. The employee there had to end up putting a display in the middle of the street. The people who passed by must have thought that it was a strange situation and the truth is that it had quite a comic side, but an the end, it turned out to be a good lesson of solidarity.

You have struggled a lot for all these improvements. Can you explain an example of some success you’ve achieved?

I used to live in the area of Vallvidrera where a few years ago the roads throughout the area were impassable for all those who like me, need wheels to get around. I got together with the Neighbour Association, we did photo shoots, visits to the Council of Sarrià, quite an Odyssey. The idea was to prove that the roads in the state that they where implied a discrimination for those who need an adapted environment and that in the long-term, to have an adapted neighborhood would be a benefit for everyone. We finally succeeded! They started improving all the pavements and the sidewalks, it is much better now!

What was the next step?

Then I started to design and publish routes adapted to functionally diverse people. By doing this kind of work, I realized that architectural barriers are very important, yes, but the invisible barriers are crucial. When people see me, perhaps because they assume that I have been having a rough time, they open up to me, they tell me about their lives, their problems. There are so many barriers that we don’t see: mental, emotional, fears, insecurities … Each person has tis own.

It must be difficult to find solutions for what it is not so obvious to spot.

Invisible or, not obvious does not mean impossible. I began to study social integration to work with diverse groups of people who suffer. For example, one of the tasks that I do is to help those who have had an accident and are going through a similar situation to the one I passed. I also do talks for accident prevention. If I can get any young person who has been drinking to not drive, for example, getting where I am, can make sense.

How was the process of studying social integration?

Hard, and slow because of some health complications that I had. Also, of all the schools that I went to visit, only three, if I remember well, were adapted. It is ironic that a social integration school is not adapted, but I trust that they will be fixing that sometime soon. I decided to enroll in a school that is in Esplugues (a town in the outskirts of Barcelona) where they didn’t put me any kind of impediment, they just asked: ‘what do you need to study?’ And they helped in everything, in fact the only thing I need is a table that is a bit higher and nothing else. Other schools had such a negative approach towards me, they would say it would be too hard for me to follow their course since I cannot write with my hands… So, I went to Esplugues.

Three years later, you were a social Integrator.

Yes. And I was offered to do an internship with teenagers from 12 to 16 years at the same school where I studied. At first I was all the time in the school’s library, the teachers would send conflictive kids to me and expected me to help them with the lessons. But this was not really my specialization and I could not help much. I was halfway between a teacher, psychologist and big brother. But the task was not quite well defined.

It must have been difficult to find this balance.

Complicated. Kids from very different environments came to me quite destabilized, wore ‘corrosive postits’ like: ‘you’re useless’, ‘you are not going to do anything’, etc. Some of them had suffered bullying at school or were neglected at home. I believe that every person has different capabilities. But, there is a tendency to cut the wings of those young people that for a reason or an other, didn’t quite fit in the education system. My job was to listen to them and to appreciate them for what they were. I tried never to judge them.

The figure of the social Integrator seems very necessary in a school.

Increasingly. Teenagers need someone who listens to them and that directs each case to the service they need, whether it is a speech therapist, a psychologist, social services that work with guys who have problems with drugs, for example, whatever they need. It is very difficult to grow up. We should understand that the most important thing is to persevere and to fight for what we want. Any effort, in the long term, is rewarded. We have to accept that some stages of life are just rough, but there is always a positive compensation waiting at the end of any tunnel. The road is very hard, but the payoff is huge.

Of course. When I completed my internship months in the school, I asked if I could continue helping there. I had already started to see a lot of kids who had come to me with problems, and were much better: they were more happy in general terms. That was a very comforting feeling. That work was going on a good track. The following year I continued there with two other colleagues who were also doing their social integration’s internships. We started with the same strategy that the previous year: listening and talking with conflicting students in a corner of the library. Until one day I decided to explore the school’s facilities.

What did you find?

I realized that many of the kids with behavioral problems are stressed because they cannot stand to be locked in a classroom, they need to learn by doing odd jobs outdoors. I decided to transport the classroom in the garden. That was a revelation. How could I not had thought of that before? I put them all to work at the vegetable patch. The physical work did them good. When the patch was arranged, they themselves saw that there was a half destroyed wall. They all started to fix it with its own initiative, a great teamwork lesson: one did the cement, others wore the bricks… After that, they painted the wall. Finally, it was fixed, painted, beautiful. Then I asked if they thought they could do something else. I thought it was all done, but they said that there was a very important thing missing.

‘Teacher, teacher’ (they call me teacher), ‘it is easy to enter here for all of us, but not for you. There is this step here…’ I was very excited to see that a student had seen that I had an impediment and that he wanted to fix it. They put everyone to chop the step and together they did a ramp. When I was able to get into the garden as everyone else… That was a transcendent moment. They were all very satisfied with the result. It’s huge what they managed to learn with that garden. While working, they had been able to talk about deeper issues, those that do not usually arise in the classroom, they had released a lot. There are no words to describe the pride of seeing the happy faces of all those young people who had been finding answers to their concerns.

And after the garden…

Yes, this year we want to take them to visit children’s hospitals, also to see a minors accused in a trial. I want them to learn that there is an afterlife to their problems, that there are other teenagers with other difficulties.

And finally Bernat, how would you summarize what you have learned in all of these journeys?

I’ve learned that you can walk around wherever you like! Don’t allow anyone to lead your way because, at the end of the day, you are the one who walks. You are the one who builds your own future. My motto is ‘no limits, no ways’: there are no limits, no predetermined ways. It is very clear that what really hurts us all, is what we don’t see, those invisible barriers. ∗ 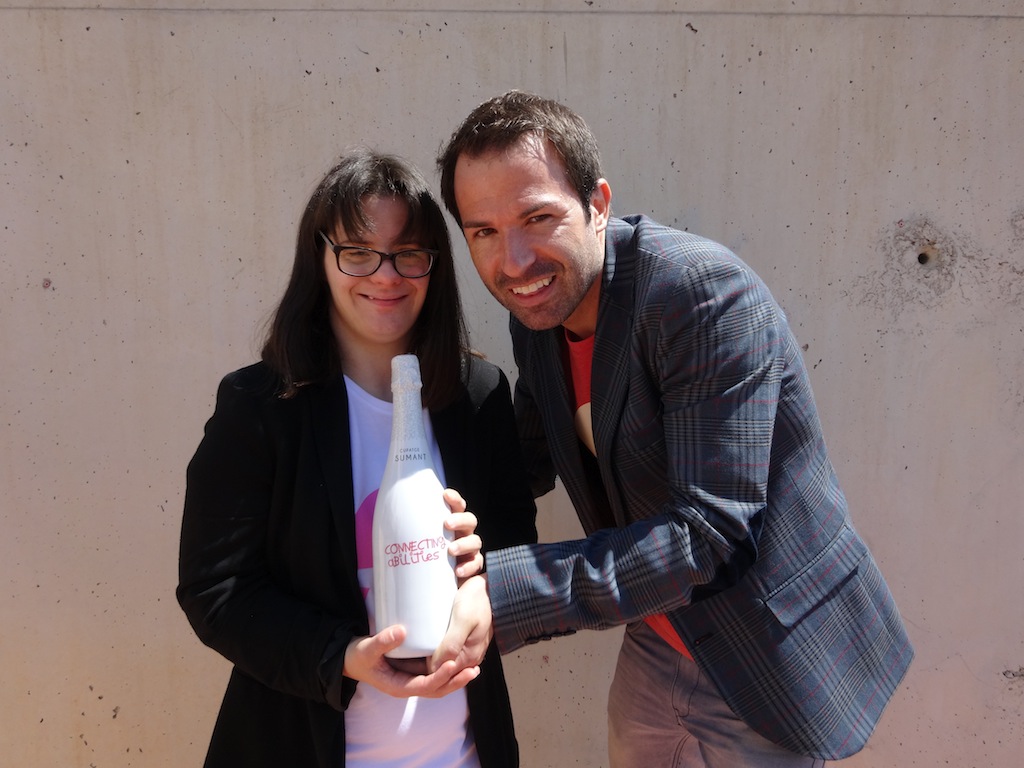 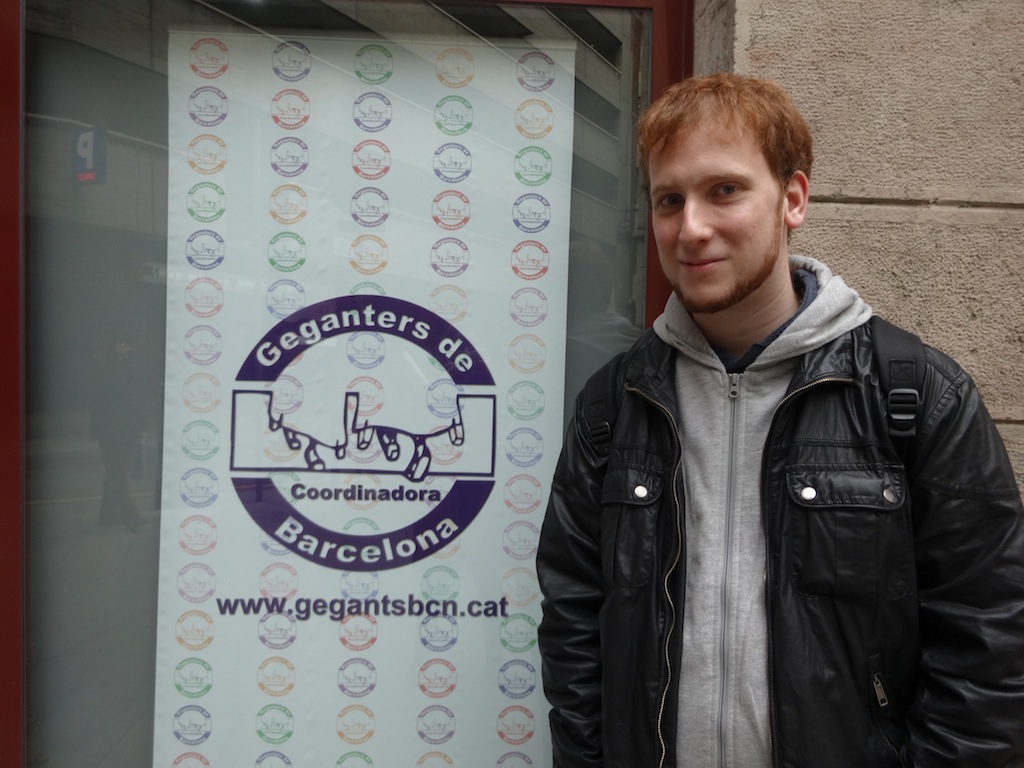 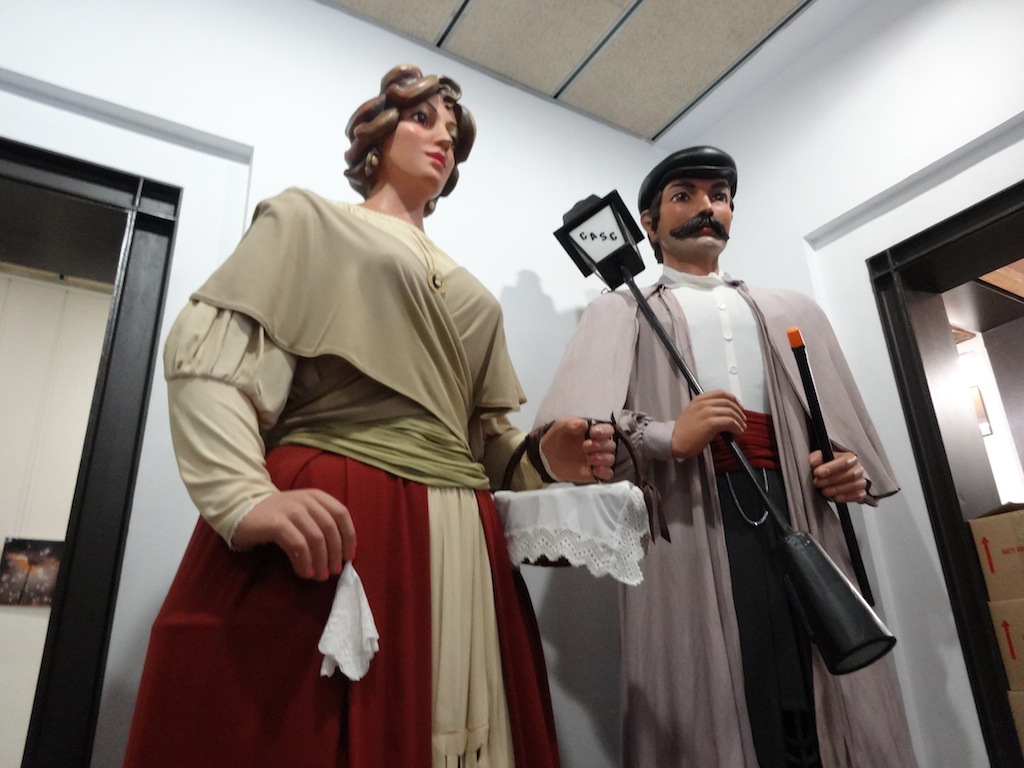