Alex Llovet (Barcelona, 1974) is a musician (member of the group The Pinker Tones) and also a photographer. He has just published Querido Vecino (Dear Neighbour), a book that features 140 portraits of the people who live in Mas Sauró, the neighbourhood that ‘belongs to Barcelona, but is out of the city’: an area near Vallvidrera, by the Collserola mountains, eclectic and still unknown among many people in Barcelona. This book not only shows a series of portraits of very different characters, it also tells us about how places are what they are because of the people who live in them and who build them every day. The idea behind this project is similar to Barcelonogy: we increasingly feel the need to explain others and therefore, to explain ourselves through them. Alex is aware of the importance of portraits and words in order to help us preserve (or build) a memory that future generations will, undoubtedly, inherit. 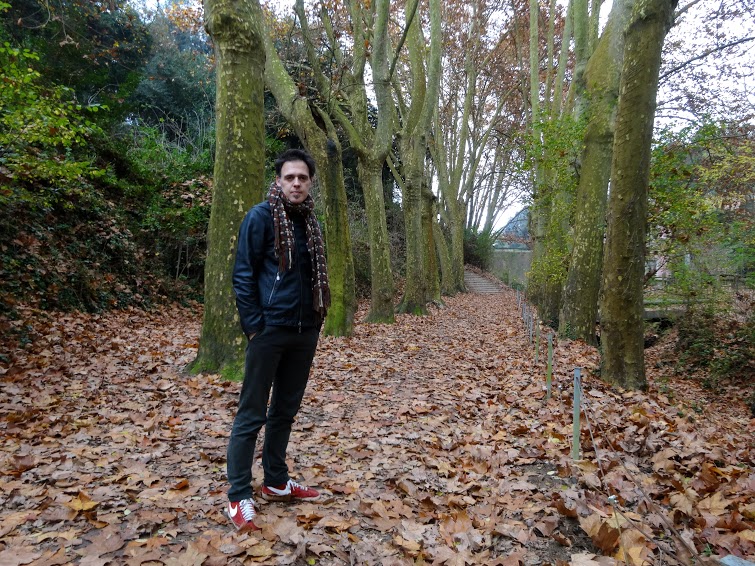 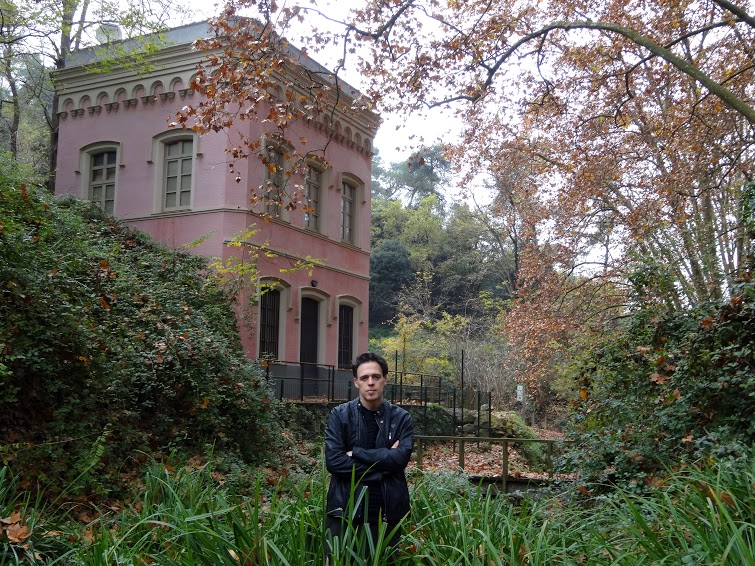 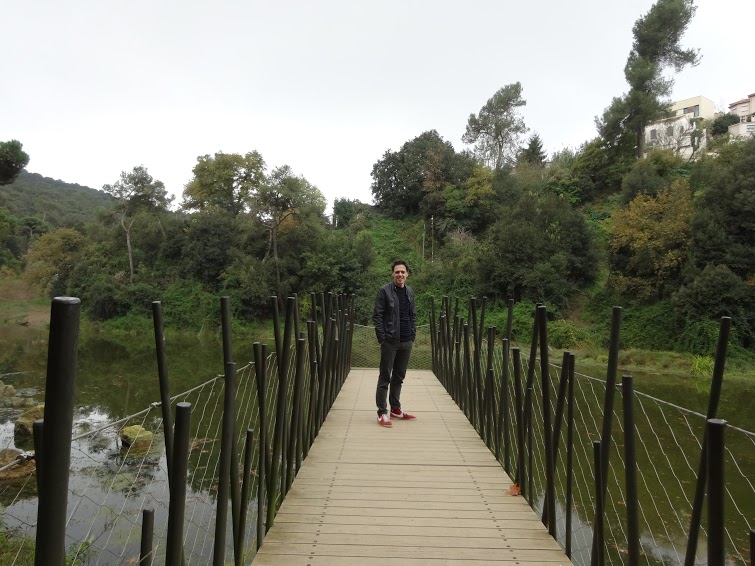 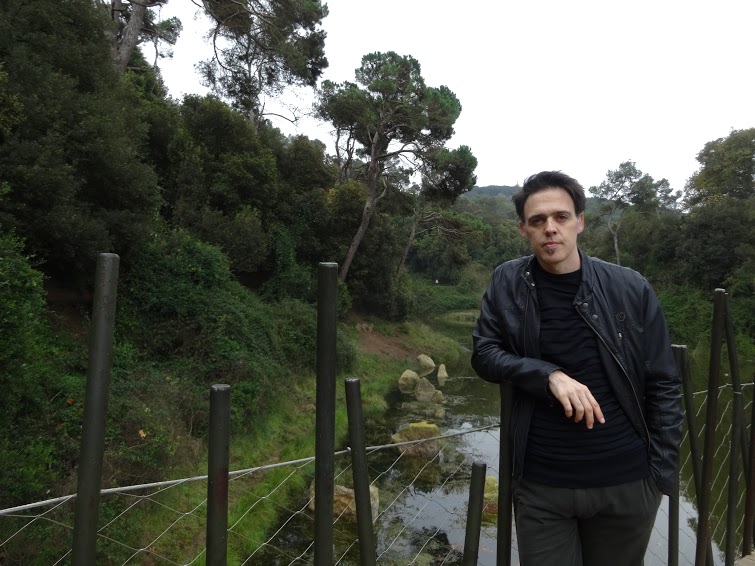 Querido Vecino’s portraits are divided in three groups: ‘the first settlers’, ‘they called it the Bronx’ and ‘the newcomers’. The image where you appear with your family belongs to the third group. When did you move to Mas Sauró and what brought you there?

I moved in the neighbourhood almost 12 years ago, so I belong to the immigration wave that corresponds to the third chapter of the book, ‘the newcomers’. 120 years ago, these mountains where only populated by trees surrounding Can Sauró, the former farmhouse that gives its name to the neighbourhood. In the early XXth century, some people began to appreciate this area for its proximity to Barcelona and several popular picnic spots appeared and they quickly got filled with ‘weekenders’. We are aware of all this activity thanks to the work of photographers like Roisin or Toldrà and old postcards. Shortly after this first wave, the Teula, a modernist house (recently catalogued), the dam and the guard’s gatehouse were built. And a few years later, the ‘the first settlers’ began to arrive: they were mainly immigrants from Galicia and Southern Spain who somehow took advantage of the lack of control and regulation, in order to build very simple little homes. So, this area started to get populated very slowly until the 70s, when its darkest era began. The second chapter of the book is ‘they called it the Bronx’ because by those times, the neighbourhood became a centre for drug trafficking and many people ended up leaving it. However, the turn of the century also brought a change of cycle, from the late 90s, the district started recieving those that I call ‘the newcomers’. My family and I belong to this third group. Overall, we are young people who value the contact with nature without losing the umbilical cord with the great city that Railway represents. Coincidentally, we share the motivations that brought the first ‘weekenders’ around here. It’s funny!

How do you see Barcelona from the border?

As a child, I lived in Vallvidrera for three years. I have few but very good memories of that time. The life in that place was more like that of a mountain village rather than like in the neighbourhood of a great Mediterranean city. 20 years later, while studying photography, I repeatedly returned to the woods around the Baixador Vallvidrera Station. I used to walk around the nature taking pictures without suspecting that destiny would eventually bring me back to this area. Now, I consider myself privileged to live here, always surrounded by trees, but so close to the big city.

I am from Vallvidrera, but I’ve been very little around Mas Sauró. Do you think that this neighbourhood is part of Vallvidrera or rather that they are two separate entities? How do you think the two zones dialogue? What are their basic differences and common points?

Indeed, while Mas Sauró was known for a while as ‘the Bronx’, Vallvidrera was called ‘Manhattan’. This gives us a hint of the socioeconomic differences between their respective neighbours. But today, thanks to generational change, both neighbourhoods are more connected than ever. On the one hand, many families from Mas Sauró take our kids to the Nabi School in Vallvidrera. Moreover, facilities like the Civic Centre and Library really encourage this coexistence. And the fact that the festival of both districts is organized jointly, can also tell you a lot. I think we have a lot in common. As for the differences, I would say Vallvidrera is more like a mountain village, while Mas Sauró is a neighbourhood in the woods.

I would like to know a little more about your book’s creation process. Did you feel shy when going into the homes of neighbours that you did not know? How were you received?

I felt no shyness, but I did feel a great respect. I think a home is a sacred place where every corner, every object and environment speaks of the people who inhabit it. Your most intimate setting defines you. Therefore, I felt very privileged that I was welcome in many homes and that people shared their stories with me. Almost every family in the neighbourhood agreed to participate in the project. Their response was incredible and I cannot thank them enough for that.

In the introduction of Querido Vecino you talk about the concept of ‘fragmented memory’. What does this mean to you? Is your book based on this idea or vice versa?

I think memory is as whimsical as elusive. We detain or reject fragments of our lives in a random and untidy way. To me, photography has two purpuses: in one hand, it helps me to sort and understand the present, but on the other, it also helps me to reconstruct the past. In the book, I bind these two ideas. In short, it is an attempt to explain a little place in the world through people who, for various reasons, are here.

Also, as an introduction to the book, there is the text titled ‘a nonexistent place’ by Toni Arbonès. How do you think Mas Sauró corresponds to the idea of a ‘no place’?

The idea of ‘no place’ is like the idea of a ‘no person’, it implies a lack of identity, and Mas Sauró is the opposite: it has a very strong and kaleidoscopic identity. It is the result of the addition of its location (a natural park by a large city), an enormous variety of houses ranging from very simple huts, to modern houses signed by architects, contemporary villas, wooden cottages, a tipi tent, two traditional farmhouses (Can Llevallol and Can Sissi), a modernist mansion (the Teula), and the late gothic Church of Santa María de Vallvidrera. It is also the sum of its inhabitants: people from many corners of the world, covering all socioeconomic strata of the Catalan society. As for the beautiful story by Toni Arbonès, I would say that the idea of a ‘no place’ refers to the fact that Mas Sauró is hidden in the forest and unknown for many barcelonians. Note that Toni is a renowned journalist and a resident of Mas Sauró. It was a privilege that he agreed to write a history of the neighbourhood for the book: it is a very special tale, full of magical realism, written from the point of view oldest tree around.

Finally, living around here in constant contact with nature, do you think that creates a lifestyle that can be closer to that of our ancestors? (compared to the life people who live in the city have).

I do not think our lifestyle has much in common with that of our ancestors. I think in that sense, the reality of people in Mas Sauró is practically equal to that of any other citizen of Barcelona, in spite of the wild boars walking around the streets, waking up hearing to the neighbour’s rooster or having swallows nesting by the entrance of your home… *