hen I met Ariadna Serrahima (Barcelona, 1984), my attention was immediately caught by her ability to analyze and question whatever surrounded her. We are living in an era of change and, in this context, Ariadna’s discourse sounds both logical and innovative. We first meet at her apartment in Gràcia where she shows me her collection of art books and the graphic and visual material that she generates concurrently to her work as a graphic designer. I ask her about her trajectory and, specially, about what it has signified to get associated, in the context of today’s Barcelona, in order to recuperate L’Automàtica, a printing house that three years ago was about to shut and where she takes me after showing me her place. She starts explaining: ‘to go back to producing, without any kind of romanticism, through a medium that was practically lost, facing new paths and new problems.’ Whoever is involved in the profession of the Graphic Arts, is not a craftsman, but is neither an artist. Ariadna’s words are very linked to the panorama that a large part of our generation is living: we need new terms to define ourselves despite the fact that, often, we no longer accept (or no longer need) this self definition. 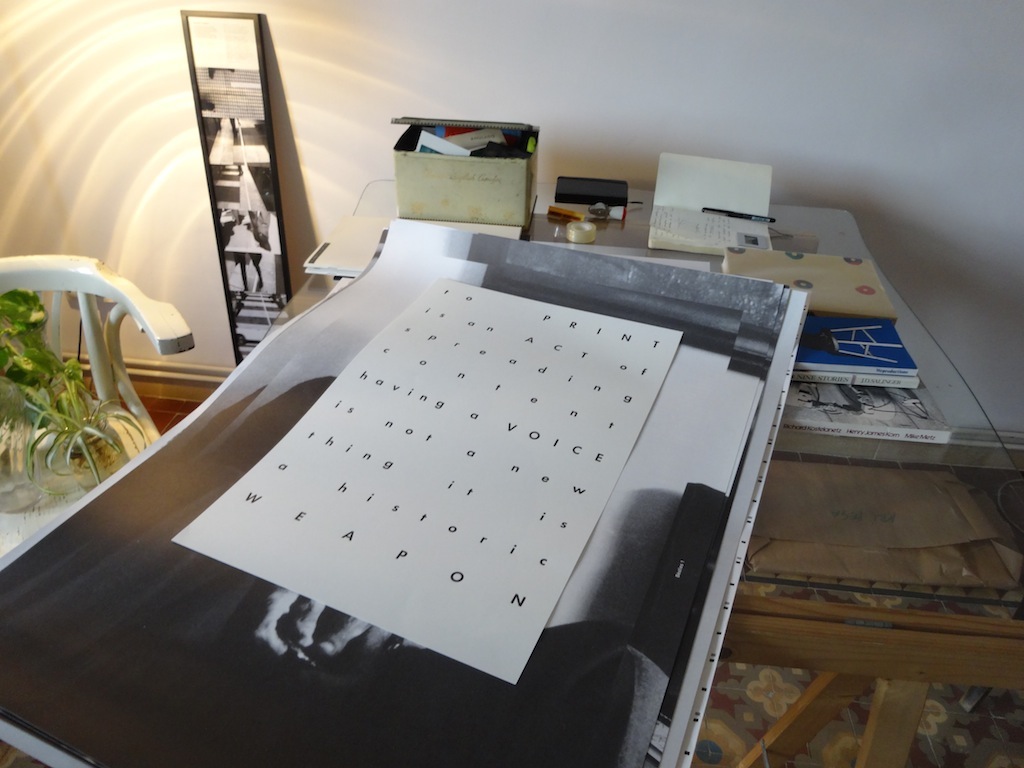 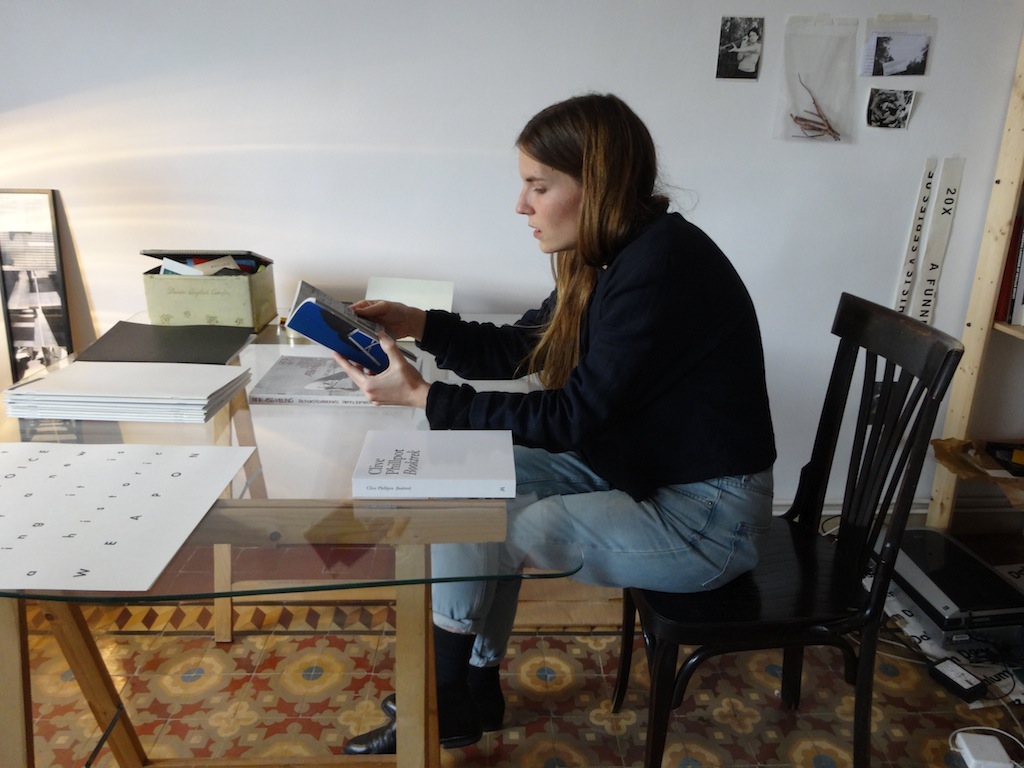 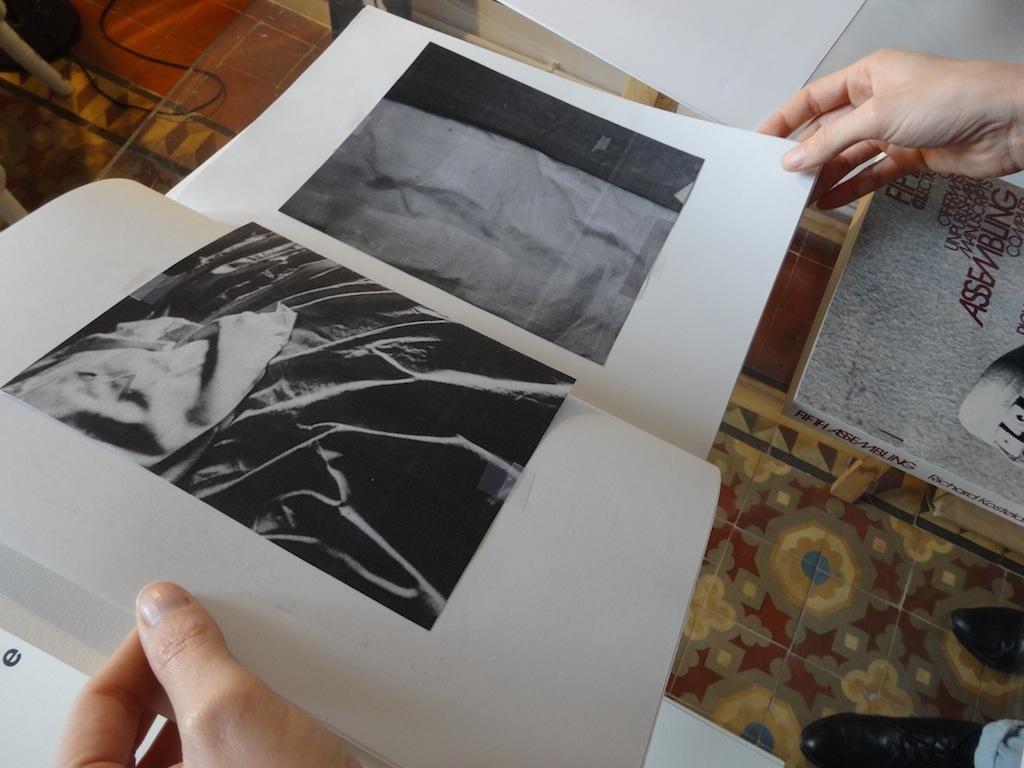 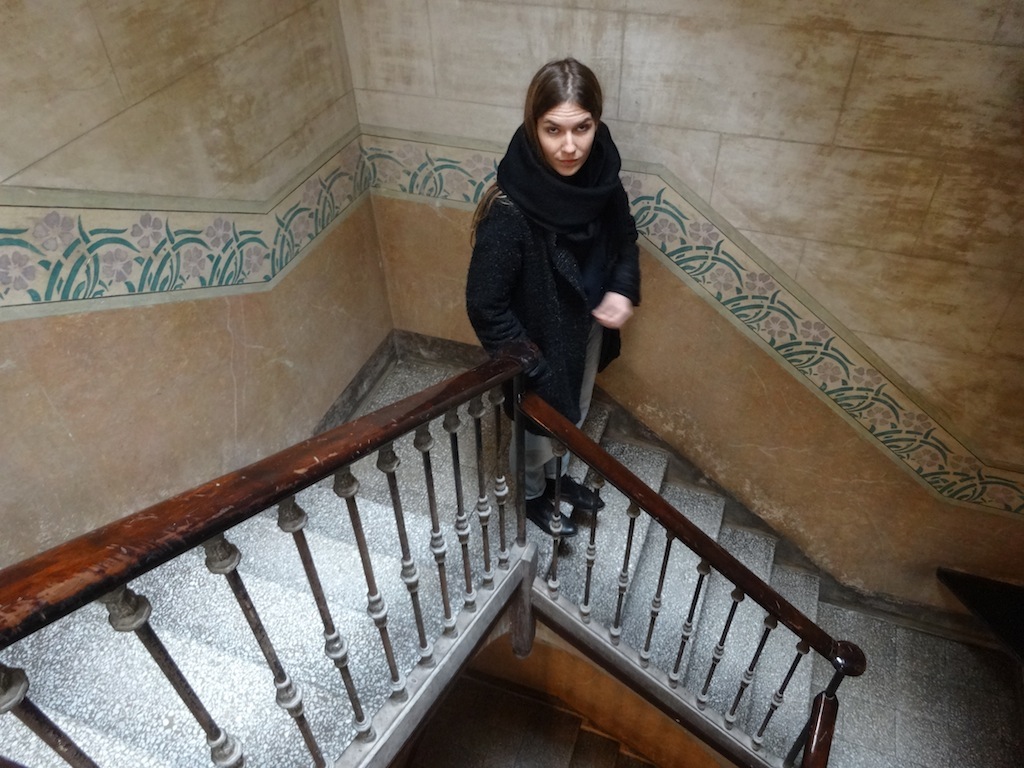 You spend most of your time in Gràcia.

Yes, I live in this neighborhood because the Studio where I work is just on the corner and L’Automàtica is three blocks away from my house. This allows me to safe time commuting from one place to another. In London, this was impossible for me.

You lived there for five years.

Five and a half years. I did all my studies there: first Art at the Camberwel College of Arts and, for a number of reasons, I changed and continued studying graphic design at the Central Saint Martins College of Art. After that, I went to New York for six months until I decided that it was time to return home.

How did you perceive Barcelona after all this time away from it?

At the beginning it took me a while to adapt. I was very used to Anglo-Saxon individualism and was always doing my own thing. Social relationships here in Barcelona are way more forthcoming. Also, it took me some time to understand that the design that is made here often lacks content, it is heavily based on formal work. After I realized all this, a moment arrived when I decided that, either I started to look for things that really interested me in this city and also started know other people, or that I left again.

After a while, I arrived to the following conclusion: why do we always hope that others will make interesting contributions and not ourselves? During the past four years, I have been collaborating and working with other people and we have started a series of projects that have been important and interesting from our professional activity and based on our concerns.

Maybe we are a generation that, in a certain way, we have been waiting to be saved my some external force…

Yes, I am a hybrid between different disciplines. When you don’t have a very specific profile, it is complicated than others will come to you, it becomes necessary to start your own projects and to allow your own work to explain what you do.

I would like to know about process by which you have had to go through (or you’re going through) in order to be able to carry out your own projects in Barcelona.

Well, precisely one of the reasons why I left London is because at the end, I didn’t feel related to anything. It is such a huge city, politics are so inaccessible, and everything is so monstrous, that it is very though to build something solid there. In addition, the city is so fluctuating that every two years, your whole landscape changes, your group of friends becomes different…

It is true, and knowing that, what could you do?

My first experience in a collective was in London. For 4 years we occupied a home with other people: they were all students of photography, ‘sound art’, film … etc. It was a very conscious decision that allowed us to ask ourselves a lot of questions, to position ourselves in the big city, to be critical, analyzing the cost of living and the various communities that surrounded us. Intuitively, we had the need to get together and share all that we were going through. In Barcelona, I have found myself living again within a collective, but from my profession’s perspective. In this city, despite the fact that it’s a disaster in many ways, there is a lot to be done and so much to change, this is positive in many ways.

And, it is exactly what you’ve ended up doing with your Studio or with L’Automàtica, for example. Please, tell me about these projects.

Half of the people who are involved with L’Automàtica, also work in the same Studio that I do. We collaborate; we have common projects, generate gatherings, dialogues…

For those who don’t know about L’Automàtica, could you explain what it is and where it comes from?

I will start from the beginning. In 2011, when the movement 15-M took place, all those who were working in the Studio got interested in it, and individually, every day after work, we went down to Plaça Catalunya and listened to people talking. We knew that something important was happening and we began to do interviews, and record what was being said in the assemblies. We observed that, as designers, we almost never said anything because we are not very good speakers. However, we are good communicators, so we decided to design and publish a newspaper called Dinou (nineteen in Catalan), in it we had put together all the main ideas that we had recorded during those meetings. We printed 5000 copies that were distributed on the 19th of June 2011 during one of the largest demonstrations that took place at that time.

Those were intense months, but what remains of that in 2014?

Well, it remains for example, L’Automàtica. Here is where I wanted to get: a couple of months after the 15-M, a friend came to the Studio and told us that there was a printing house in our neighborhood that was about to be closed. If this had happened 8 years ago, it would simply have been another printing house that shuts, but at that time we decided we had to do something. One of the most interesting conclusions that we had was precisely the importance of recuperating that space instead of buying it or buying the material it would no longer be needing. The difference between a concept and the other is abysmal. When I previously said that there is a lot to be done in Barcelona, I have to nuance that idea: plenty of projects are already being developed! There are people who say that the 15-M was a bubble and that was it; it’s not true because many projects such as L’Automàtica arose from the reflections of those days.

This was almost three years ago. I would like to know about the daily life and the work that is generated now, after the printing house’s recuperation?

One of the most important things that L’Automàtica experience is teaching us is that a discourse is created by working. So, our discourse is all about: ‘do, make things happen, be active’. On the other hand, recuperating this printing house has allowed us to learn and love a craft, to design through graphic production, experiment, organize workshops, generate complicities with people from the city who comes to produce with us… We need to know how to work with different tools and know which ones are better depending on whatever you need or want to achieve in each project. Everything has its time, its gesture, its process, its willingness and his technique. We have been able to experience this by printing with the old mobile types in L’Automàtica’s machines.

From here, other projects have started to get materialized, tell me about them.

Yes. From L’Automàtica , which is somehow the matrix project, other projects have emerged. As for example Munt, that we have started along with two other partners of the L’Automàtica. Munt is a sound editorial that publishes the work that experimental musicians create around the possibilities offered by the environment and the discourse in L’Automàtica. This project declares and transmits the following idea: ‘doing is a weapon. We publish sound works and we give a voice to a space of graphic production. We advocate and generate findings. Munt is a reaction.’

It is easy to look at L’Automàtica as a romantic and nostalgic project, but we are not interested in this vision. What interests us is that we have recuperated a space of work and production that works on the basis of self-management. Having said that, L’Automàtica is much more than just a printing house.

To what conclusions you have arrived after these reflections?

There are no conclusions yet, because we haven’t reached the end of this story. ∗ 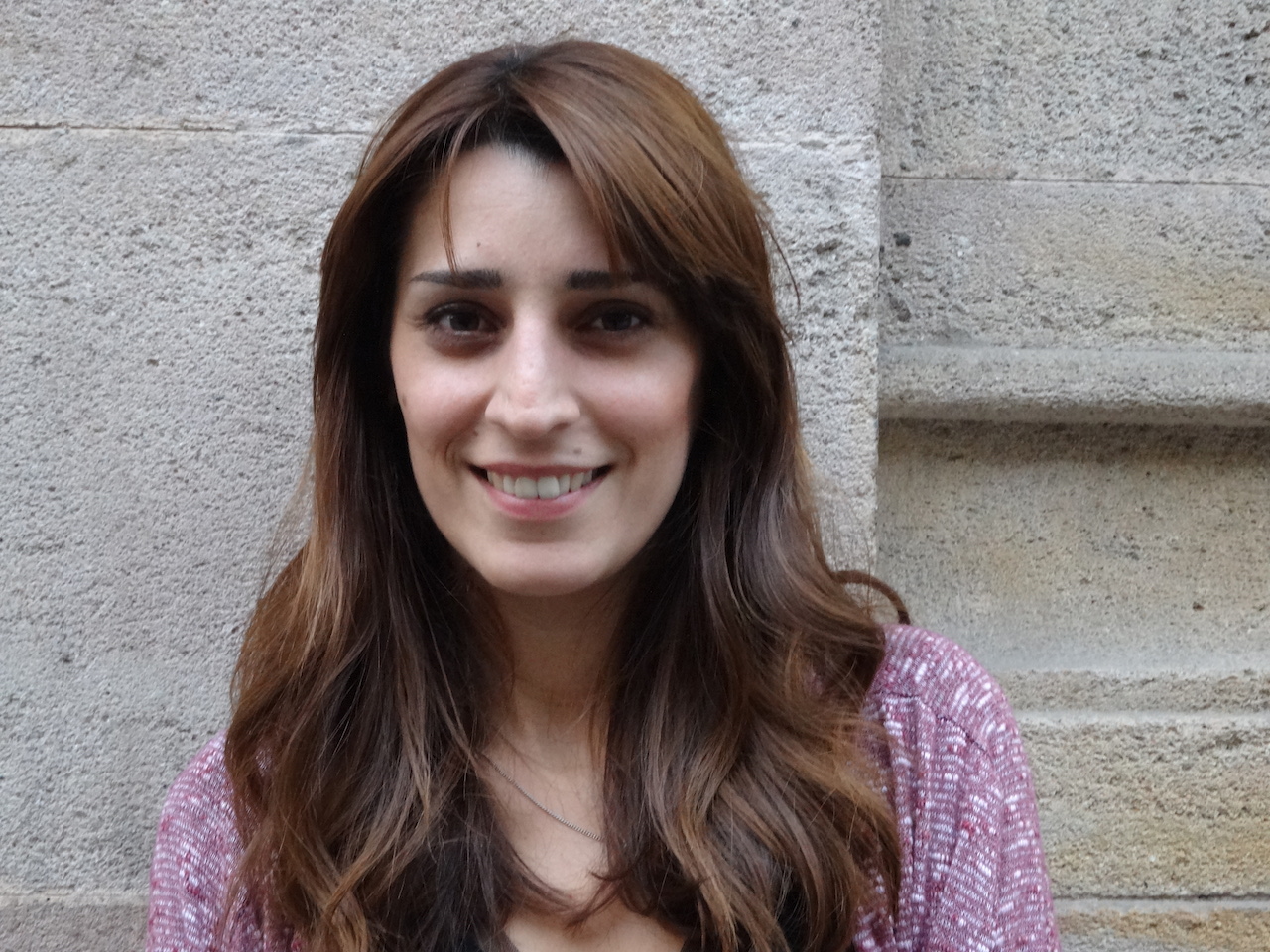